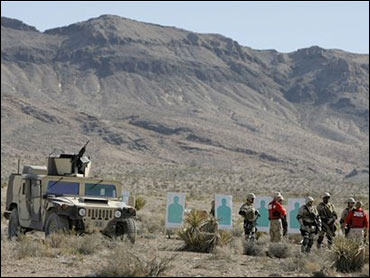 Richard Bergendahl fights the war on terrorism in Los Angeles for $19,000 a year, one of the legions of ill-trained, low-paid private security guards protecting tempting terrorist targets. One of them is the skyscraper down the block, identified by President Bush as a building chosen for a Sept. 11-style airplane attack.

Bergendahl, 55, says he often thinks: "Well, what am I doing here? These people are paying me minimum wage."

The security guard industry found itself involuntarily transformed after September 2001 from an army of "rent-a-cops" to protectors of the homeland. Yet many security officers are paid little more than restaurant cooks or janitors.

And the industry is governed by a maze of conflicting state rules, according to a nationwide survey by The Associated Press. Wide chasms exist among states in requirements for training and background checks. Tens of thousands of guard applicants were found to have criminal backgrounds.

"A security officer is ... not trained to be a G.I. Joe," said Paul Maniscalco, a senior research scientist at George Washington University.

More than five years after the 9/11 terror attacks, Maniscalco is helping to change the security guard culture. He recently developed an anti-terrorism computer course for shopping mall guards, who are being taught that they now have more concerns than rowdy teenagers and shoplifters.

The middle ground pay for security officers in 2006 was $23,620, according to a Labor Department survey. The low pay reflects cutthroat competition among security firms, who submit the lowest possible bids to win contracts. Lowball contracts also mean lower profit margins and less money for training and background checks for guards.

Some states require FBI fingerprint checks for every guard job applicant. Others let the industry police itself. The following states don't regulate the industry: Alabama, Colorado, Kansas, Mississippi, Missouri, Nebraska, South Dakota, Kentucky, Wyoming and Idaho. The city of Boise and many Idaho communities do regulate guards. Some states require background checks for company owners but not guards.

In states that keep such records, the AP found that more than 96,000 out of 1.3 million applicants, about 7.3 percent, were turned down - mostly, state officials said, for having criminal histories.

The most important number, however, can't be found: individuals convicted of serious crimes who were hired in states without background checks or in states where they slipped through the system.

Congressional investigators reported last year that 89 private guards working at two military bases had histories that included assault, larceny, possession and use of controlled substances and forgery. The Army says it has purged guards with criminal histories from its bases.

"I frankly was shocked, after 25 years in the FBI; I assumed those in the private sector had gone through criminal background checks," said Jeffrey Lampinski, the former FBI special-agent-in-charge of the Philadelphia office who is now an executive with AlliedBarton Security Services.

The security businesses' own trade group, representing the largest firms, acknowledges the industry as a whole isn't ready to recognize signs of terrorism and respond to an attack.

"I would have to say no," said Joseph Ricci, executive director of the National Association of Security Companies, when asked whether most guards are trained to protect the homeland. "Companies that hire private guards began spending more for security after Sept. 11, 2001, but then began cutting back. We've become complacent because we haven't had attacks."

For guards at the Energy Department's nuclear weapons facilities, failure to protect nuclear materials from terrorists could be catastrophic. That's why their training is far more exhaustive than that of most security officer recruits.

At the Nevada Test Site, the former nuclear weapons testing ground 65 miles from Las Vegas, contract guards working for the Wackenhut Corp. train in desert camouflage and military helmets, fire automatic weapons, put on gas masks and kick up the desert dust in military Humvees with gunners on top.

They crouch behind cactus plants to shoot at targets, stalk "intruders" with drawn sidearms and burst through doors of buildings, first dropping "flash-bang" devices that have an explosive sound and fill the room with smoke.

"Failure on our part is failure to protect a vital national security asset," said David Bradley, the Wackenhut general manager at the federal facility, where current operations include emergency response training and conventional weapons testing. "We don't see that ever occurring."

Bergendahl, the Los Angeles guard who protects the high rise near the formerly named Library Tower - now the US Bank Tower - thinks often of Bush's disclosure last year that terrorists with shoe bombs planned to take control of a jetliner and crash it into the building.

"It scares me," said Bergendahl, who has spent 28 years as a security guard.

Franklin Bullock, 51, a guard at the busy bus and rail commuter station in Kent, Wash., said he's had no drills with police and fire responders despite terrorist bombings of trains and buses overseas.

A supervisor once tested Bullock by walking him down the platform to see whether he would spot a package he could hardly miss. It had "BOM" written on it. That was the end of his useful hands-on training, Bullock said.

"Everybody's so afraid he's going to make a mistake," said the $25,000-a-year guard, who spent most of his working life as a security guard or correctional officer. "There's no security at all."

Maria Macay, 54, a former travel agent, has been working the midnight-to-8 shift guarding a hospital in San Francisco for about $25,000 a year. She donned a protective suit and mask in a drill for a possible chemical or biological attack, but she isn't confident she could handle a real attack.

"I don't think I learned a lot," she said. "It's scary. Thank God, it hasn't happened. If I had to be put in that situation, what is going to happen to my family if something happens to me?"

Police patrol officers were at $23.27, emergency management specialists $24.26 and firefighters $20.37. The median reflects the same number of individuals above those amounts as below.

The Service Employees International Union is trying to raise guard pay by negotiating master contracts with multiple companies in urban areas. The union has contracts for guards in New York, Chicago, Minneapolis and the San Francisco Bay area. Negotiations are under way in Seattle, and the union hopes for talks in Los Angeles, Sacramento, Calif., Washington, D.C., and Boston.

They want mandatory training requirements and a required national background check for all job applicants that would be accessible to all security firms. Currently, companies can access the FBI's national fingerprint database only through state agencies. If the state doesn't require background checks, companies are barred from the system.

Company executives are worried about their industry's reputation, and they don't want to be caught hiring convicted felons to protect other Americans.

"Potentially you could have a small organization who might want to cut corners and, God forbid, you're not sure who they're hiring," said Robert Johnson, a vice president of Blackstone Valley Security in Cranston, R.I.

Rich Powers, owner of Guilford Security Agency Inc. of Greensboro, N.C., said, "We've had everything from an arsonist to a burglar and a shoplifter" applying for jobs.

Nobody knows how private security guards would perform in an actual terrorist attack, but several incidents serve as potential warnings: