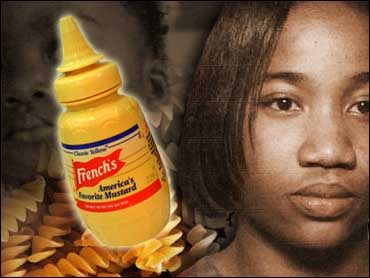 Authorities say a 2-year-old left alone for nearly three weeks while her mother was behind bars is in good health.
The little girl, who survived by eating mustard, ketchup, rice and raw pasta, was treated for malnutrition and dehydration.

"She's sitting up in the bed and laughing and playing with the nurses," said Wolfson Children's Hospital spokesman David Foreman prior to the little girl's release from the hospital late Tuesday.

The child's father, Ogden Lee, who is separated from the child's 22-year-old mother, Dakeysha Telita Lee, said he had been trying to contact the mother for two weeks and did not learn until Sunday that she was in jail.

Dakeysha Lee was charged Monday with child abuse because she didn't let anyone know that her daughter was alone in her apartment. She was jailed Sept. 10 on unrelated charges.

Ogden Lee told the Florida Times-Union that his daughter had wolfed down four pieces of chicken, mashed potatoes, Cheerios and two pints of milk after being taken to the hospital.

"I am a 240-pound man and I can't keep from crying," he told the newspaper. "I can't even imagine how hungry she must have been."

When a manager let him into the apartment Monday, the girl was lying in a baby's bathtub, covered with a towel and was watching cartoons. She was filthy and covered with dry ketchup, he said.

"She grabbed me and wouldn't let go of me," Lee said. "It is really a miracle how good a shape my daughter is in. I don't know how she did it."

Lee, 33, said the girl had dragged the food, toys and other things into her mother's bedroom, where he found her.

The child opened the refrigerator and got into a pantry, eating anything she could find, including dry spaghetti and macaroni, Sheriff John Rutherford said.

Leaford James, who lives across a breezeway from Dakeysha Lee's apartment, said he had heard crying from the apartment "but nothing to get suspicious about."

Dakeysha Lee and was being held Tuesday on $20,000 bond. She was represented by the Public Defender's Office on the original charges, but it had not been assigned the child abuse case. Her appointed attorney was not immediately available for comment.

"We do not have any idea why she didn't alert anybody" about her daughter, Rutherford said.

The Department of Children & Families was reviewing the case to determine where the child should be placed.

"The child is safe in our care," said Patricia Mallon, a DCF district manager. "Our every effort is to ensure her safety and well-being."