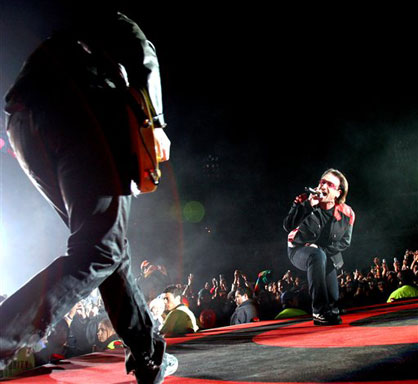 Lennox Lewis still believes something was wrong at ringside in his first fight with Evander Holyfield.

So does Holyfield, although in his case it had nothing to do with funny judging.

"I was cramping going into the ring and that was my biggest problem," Holyfield said. "I just didn't feel well, and I thought several times of just quitting."

Holyfield didn't quit, of course, and ended up being rewarded with a controversial 12-round draw that both prevented the heavyweight title from being unified and sparked investigations into how the ringside judges scored the fight.

On Tuesday, both fighters got together once again to vow that on Nov. 13 they will finally get it right.

"The judging definitely was suspect. I believe there was some influence there," Lewis said, raising his fists. "But I'm bringing my own two judges to this fight."

Months of fragile negotiations for the rematch ended with both fighters signing contracts over the weekend that will pay them some $15 million each to meet again at the UNLV campus arena.

Though Holyfield still maintains he did not lose, he admitted Tuesday that he fought poorly. And he accepted parity in the purses this time, after making $20 million to $10 million for Lewis when they first fought March 13 at Madison Square Garden.

"It's like getting demoted because you didn't do as well as you should," Holyfield said. "If it means taking less, I'll take less. If I fought a great fight (the first time), I wouldn't be sliding down."

Holyfield's IBF and WBA titles will be on the line once more, as will the WBC title owned by Lewis when the two try once again to unify the heavyweight championship for the first time since Riddick Bowe threw the WBC belt into a garbage can after beating Holyfield on Nov. 13, 1992.

This time, though, the organizations who give out the titles will not be picking the judges as they did in New York City. That will be done by the Nevada State Athletic Commission, which made it clear Tuesday that it will be in charge of the officiating.

"All we want in the state of Nevada is the man who wins the fight in the ring to get the decision," said Marc Ratner, the commission's executive director.

Lewis and Holyfield appeared together as a curtain was raised amid music and spotlights in a night club Tuesday at the Las Vegas Hilton.

Lewis refused later to pose for pictures with promoter Don King, who he believes may have influenced the judges into giving Holyfield a draw.

"You're biased against me," Lewis told King, saying later that "I don't want to stand there so he can put his arm around me and pretend he's with me."

Holyfield, who will be 37 the week after the fight, said after the press conference that he has watched tapes of the first fight over and over to figure out what went wrong.

His stomach was upset and he had crmps in the ring. Then, Holyfield said, Lewis fought less aggressively than he expected and he couldn't catch him in the ring.

"It was a rough night," Holyfield said. "But it wasn't that I was old in that fight. I was a little under the weather. People ask if Evander can still perform. Nobody will have to guess after Nov. 13. They'll get the opportunity to see in the ring."

Lewis said there was little else Holyfield could bring into the second fight except maybe some renewed determination.

"All Evander Holyfield is going to be is a little older for this fight," Lewis said.

Holyfield had predicted he would knock out Lewis in the third round of the first fight, saying he received a revelation telling him so.

The third round may have been Holyfield's best of the night, but Lewis was still standing when it ended and the rest of the fight was a long one for Holyfield.

"After the third round was over, there was no plan for the other rounds," Holyfield said. "After that round, I had to talk myself back into fighting the last nine rounds."

The rematch, expected to sell out the 18,000-seat Thomas and Mack arena, is being sponsored by Caesars Palace and the Mandalay Bay hotel-casinos, which put up $10 million for the rights.