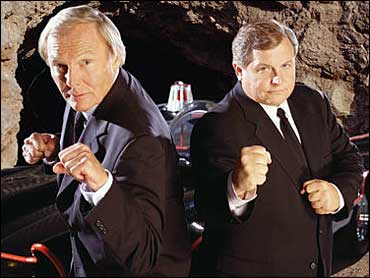 Holy reunion! Thirty-seven years after Adam West and Burt Ward put on skintight suits to keep Gotham City safe from the villainous Penguin, Joker and Riddler, the Dynamic Duo is back together for a peek at what really happened behind the scenes.

There were on-set explosions that left Ward injured daily, encounters with lusty female fans, whispers of West and Ward being gay, and complaints from censors about the sexual innuendo in the ABC series that aired from 1966-68.

"Our show was a lot different," Ward said. "We teased them, taunted them and played with their minds. For kids, it was kept clean. Teenagers saw all the double meanings and they appreciated it."

West and Ward play off each other as well as they did during the swinging '60s in the CBS movie "Return to the Batcave: The Misadventures of Adam and Burt" airing Sunday at 9 p.m. EST.

"It's dramatized to an extent, but most of it really did happen. All good comedy is based on truth," West said. "Now they're saying we're a wonderful comedy team. What were we before?"

In the two-hour movie, West, 74, and a rotund Ward, 57, are forced to relive their past to find clues to recovering the Batmobile after it's stolen from a Hollywood charity event.

When a bystander suggests calling the police, West in his best deadpan says, "This is a job for actors. We'll find the Batmobile."

"Us?" Ward replies. "We wouldn't even know where to start."

The movie was done by the same team behind the 2001 CBS hit movie "Surviving Gilligan's Island." Dawn Wells, who played Mary Ann, is co-executive producer, Duane Poole wrote the script and Paul Kaufman is director and executive producer.

"The network realized the value of the 'Batman' series and the way the public responded to West and Ward," Kaufman said. "There's something about those two. Watching the series as a child, it was very exciting to work with them."

West saw the movie as a chance to reward fans who clamor for additions to the "Batman" franchise when they meet him at conventions.

"They always greet me with warmth and humor," he said. "People do lines from the show, do entire scenes, they ask me to say lines. People are very funny about the show. I've got three generations who come up to me."

The adventure reunites them with Frank Gorshin (Riddler), Julie Newmar (Catwoman) and Lee Meriwether (Catwoman). In one bar scene, Newmar plays a vivacious vixen who grooves with West to the old "Batman" theme.

"That was a reference to Batman drinking the mickey in that first episode and him doing the Batusi," West said. "I'm always asked, `Do the Batusi?"'

Viewers of the old show will appreciate the inside jokes, as well as familiar touches like a spinning Batmobile between scenes, cartoonish exclamations on screen during a fight, and voiceovers (by Lyle Waggoner) leading into commercials asking if the Caped Crusader and Robin the Boy Wonder can solve the mystery.

West and Ward haven't kept up with each other over the years, but they picked up where they left off when filming began.

"I had a fantastic time with Adam," said Ward, who lives outside Los Angeles and runs Boy Wonder Visual Effects, providing 3-D animation and special effects for movies and television. "You put the two of us together and we don't have to say anything and people start laughing. We were doing things on the first or second take."

After the show was canceled in '68, both actors had the same reaction: Holy typecasting! West and Ward were virtually unemployable and got stuck making personal appearances for several years.

"I was rushed into some not very good movies, and I just hit the beach and nursed my wounds for a while," said West, who eventually got work doing voiceovers and guest shots. "Part of it was the dinosaurs of Hollywood went away, people who didn't get it. I was certainly more welcome when the younger people came in."

Whatever bitterness West felt is gone. He lives in Ketchum, Idaho, with his third wife. They've been married 31 years and have six grown children between them.

"I have such a fondness for it. It's my signature role," he said. "I'm grateful I had a chance to create a classic character. I don't want to be a bitter, aging actor who thinks he's typecast. My God, what man wouldn't want to be Batman for a night?"

Or maybe longer, since there's already talk of a sequel.

"I may not pursue my plan to become a total recluse," West said.