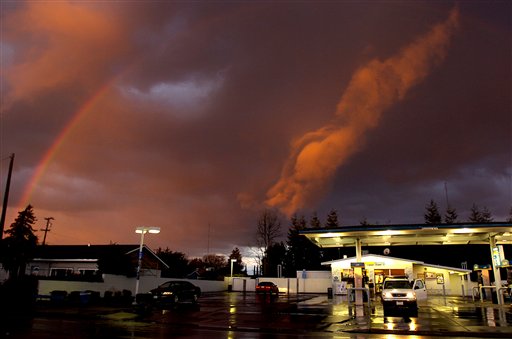 During his seven years in Green Bay, Mike Holmgren helped make Brett Favre a superstar. Holmgren returned Monday night and his Seattle defense made Favre look like a novice.

Led by Cortez Kennedy and Shawn Springs, Holmgren's Seahawks forced seven turnovers, six by Favre, as they beat the Packers 27-7.

Jon Kitna chipped in with touchdown passes to Derrick Mayes and Shawn Dawkins, Ricky Watters ran for 125 yards on 31 carries, and Springs returned a blocked punt 61 yards for a touchdown.

Green Bay, which lost for only the second time in 35 games at Lambeau Field, also contributed to its own demise with 10 penalties for 103 yards. That included two personal fouls on one play against offensive tackle Earl Dotson, who was so frustrated trying to block Kennedy that he got thrown out of the game for shoving him twice.

Holmgren's return was an emotional time for everyone, including the man who led Green Bay to a Super Bowl win and left last year to be coach and general manager for the Seahawks.

"I'd be less than honest if I said this was just another game," he said. "Coming out of the tunnel in this stadium would give anyone goose bumps."

But the defense did the real work for Seattle (5-2), which has won five of its last six and moved into a tie with Kansas City for the lead in the AFC West.

In addition to his return of a kick blocked by Lamar King, Springs intercepted two passes, the first in his own end zone the play after teammate Charlie Rogers had fumbled a punt on his own 20.

Kennedy had three sacks and forced a fumble that stopped a Packerdrive.

"All week it was Holmgren vs. Favre," Kennedy said. "I think our defense got overlooked."

Favre, perhaps pumped up too much to impress his old boss, had an abysmal game.

He finished 14-of-35 for 180 yards and threw four interceptions for just the second time in his career the first came in 1994, when Holmgren was still trying to transform him from an erratic prospect with a strong arm into the quarterback who became a three-time league MVP and led the Packers to a victory in the 1997 Super Bowl.

"Seattle played well but we couldn't beat anybody the way we played tonight," Favre said. "The mistakes we made, turning the ball over, costly penalties. It's as simple as that."

Springs said Holmgren gave them some simple advice about Favre.

That translated into the fewest points the Packers (4-3) have scored in a game since a 21-6 loss in Dallas in 1996. If that's any consolation, that was the season they won the Super Bowl.

Holmgren's decision to decline a penalty that would have taken the Packers out of field goal range led to Seattle's first touchdown. So Ryan Longwell tried a 50-yarder, King blocked it and Springs took it back 61 yards for the game's first score.

"I wasn't sure if I made the right call because Ryan can make that kick," Holmgren said. "After we blocked it, one of my guys upstairs said 'You know, you were right."

The Packers tied it five minutes into the second quarter when Favre hit Corey Bradford on a 74-yard slant.

Seattle went ahead after an exchange of fumbles typical of the game.

One play after Tyrone Williams had grabbed a Reggie Brown fumble for Green Bay, Jay Bellamy wrested the ball from Dorsey Levens and Darrin Smith recovered. That set up a six-play, 52-yard drive capped by Kitna's 10-yard TD pass to former Packer Derrick Mayes, who on the previous plays had an 11-yard catch.

Seattle made it 21-7 on the opening drive of the second half, going 73 yards in nine plays capped by a 2-yard TD pass from Kitna to Sean Dawkins. Watters had seven carries for 39 yards in the drive, which was helped by a 21-yard pass interference call against Green Bay's Williams.

The Packers drove to the Seattle 7 late in the third quarter.

But on third and goal, Kennedy sacked Favre, stripped him of the ball and Michael Sinclair picked it up and took it out to the 35 to end the threat.

Holmgren was glad to head back to Seattle.

"I'm glad this game's over with," he said. "I didn't want my situation to take away from our players on the field."

From the way they played, it didn't.