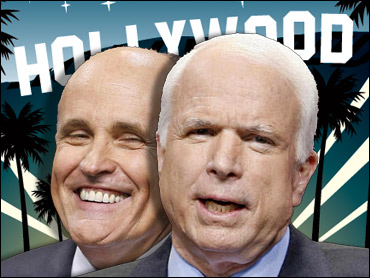 This story was written by Jeffrey Ressner.

Republicans have never had an easy time in Hollywood.

But throughout the presidential primaries, John McCain and Rudy Giuliani have been quietly working to garner what little support there is in showbiz for conservative politicians.

A little bit of Tinseltown glitter goes a long way - just ask Mike Huckabee, who has been milking support from 1980s action star and Internet humor icon Chuck Norris for all it's worth.

On the whole, Democratic candidates far outpace their GOP rivals when it comes to Hollywood money.

But among Republicans, at least, McCain and Giuliani were nearly tied in campaign contributions from entertainment business leaders, according to the latest campaign finance reports.

As of late October, the senator from Arizona had received $390,925 from PACs and individuals in the television, movie and music industries, compared with Giuliani's $379,126, according to the Center for Responsive Politics.

On Jan. 31, immediately following the GOP debate at the Ronald Reagan library, McCain will headline a fundraiser at the home of MGM Chairman and CEO Harry Sloan.

A favorite of veteran entertainment and media moguls, McCain has received donations from Jerry Bruckheimer, Barry Diller, Kirk Kerkorian, Richard Parsons, Lorne Michaels and Brad Grey, and from a handful of character actors including Rip Torn and Dick Van Patten.

"McCain's support in Hollywood goes back to the 2000 election, when he had so much backing from independents, and then in 2004, due to his friendship with John Kerry," said Sloan.

"Those two events gave him a positive image with the Hollywood community. If anything, he's seen as 'the tolerable Republican' to a lot of the Democrats and liberals here. I seldom hear anybody say anything negative about John, even though they probably disagree with him on a majority of the issues."

Still, it appears that Giuliani has far more on-screen A-List star power behind him.

Actors Adam Sandler, Kelsey Grammer and Robert Duvall have all weighed in for the former New York mayor, along with Brad Grey and "24" producer Joel Surnow. (Duvall held a fundraiser for Giuliani at his Virginia horse country home.)

Others on Giuliani's list: actors Jon Voight (who is stumping in Florida with Giuliani), Ron Silver and Melissa Gilbert, comedian Dennis Miller, publicist Michael Levine and many so-called "below-the-line" workers who toil in less glamorous parts of the trade.

"Naked Gun" director David Zucker donated $2,100 to Giuliani's campaign - $200 short of the maximum allowed - and has met the candidate twice.

"He calls me every day," he says, joking.

Zucker isn't sure about the wisdom behind Giuliani's strategy of sitting out the early states, but said that with underdogs having won in both Iowa and New Hampshire, "all predictions are out the window" in the presidential race.

Though he's donated to the former mayor, Zucker admits he'd be "comfortable with any of the GOP candidates," except for Rep. Ron Paul (R-Texas).

Zucker said he and McCain lunched about six months ago with a dozen other Los Angeles Republicans in Santa Monica, and though he's "not crazy" about McCain's stances on campaign finance or immigration, the director appreciates the senator's straightforward (and tough) approach to the war on terror

The two men have a professional association that goes back decades: Liebman, now CEO of the superstar management firm Brillstein Entertainment Partners (whose clients include actors Brad Pitt, Orlando Bloom and Gwyneth Paltrow), worked as an assistant district attorney when Giuliani was U.S. attorney in New York.

Giuliani doesn't usually tout his showbiz connections, but he made several industry friends when, as mayor, he successfully lured television and movie producers to work in New York City.

The Mayor's Office of Film, Theatre and Broadcasting has the ability to give free permits, no-charge police protection, special services and other financial incentives to companies filming in the city - and Giuliani's office helped grease the way for Hollywood to head east.

Year after year, the sheer amount of production there broke records and raised billions for the city's coffers.

Location shooting days in Manhattan and its boroughs rose from 18,003 days during Giuliani's first year as mayor to a high of 22,029 in 1999.

Though shooting in Manhattan declined in 2001 and the year following the 9/11 attacks, they have since risen dramatically, reaching 34,718 in 2006.

Aside from making cameo appearances as himself in about a half-dozen films (including Sandler's "Anger Management") and appearing in a "Seinfeld" episode, Giuliani is the only candidate with a biopic made about his life - 2003's "Rudy," starring James Woods and Penelope Ann Miller.

In addition to the hagiography, the ex-mayor was also the subject of an unflattering documentary, 2005's "Giuliani Time."

This year there are several Republicans in the movie business who are reconsidering their party affiliation and candidate support.

At a recent fundraiser for Democratic Sen. Barack Obama in Pacific Palisades that was heavily attended by top studio execs and managers, several folks were taken aback to see longtime GOP boosters Richard and Lily Zanuck at the event.

Zanuck has previously donated to George W. Bush's 2004 campaign, McCain's 2000 presidential run, as well as to Rick Lazio, Hillary Clinton's opponent in the 2000 race for the Senate.

While Hollywood and Washington play out their strange dance for dollars and free airtime during this primary season, some veteran showbiz players are unsure exactly how politicians benefit from rubbing shoulders with the A-List.

"At the end of the day, none of us in the movie business means a thing," says a major movie producer and former studio chief who has been involved with politics for decades.

"If anybody in Hollywood thinks we're really an important part of the process, they're kidding themselves. We each have one vote, one conscience. . . and $4,600 we can each donate. That's it."