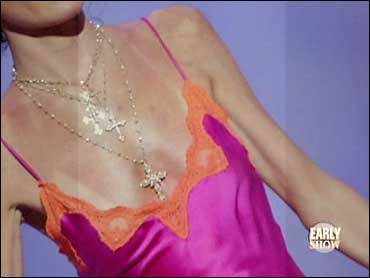 The recent death of 21-year-old anorexic model Ana Carolina Reston has many people concerned that the extremely skinny ideal in fashion and in Hollywood is spinning out of control.

Size zero and smaller is the goal for many starlets and young tabloid readers, who follow in their footsteps, and extreme dieting is raging through Hollywood like a competitive sport.

In part one of The Early Show series "Losing It" E! Entertainment News anchor Giuliana DePandi reports that the pressure on actresses and models to be thin causes some to find dangerous ways to find ways to speed their weight-loss along.

More people seem to be turning to drugs like Clenbuterol, which is approved in the United States to treat asthma in horses. The side effect of Clenbuterol, or "Clen," is that it builds muscle and results in temporary weight loss.

"I hear it a lot in my gym, and it's a dangerous drug," Hollywood fitness trainer Jackie Warner said. "There isn't a magic pill. If there was … I'm a business person, I'd be selling it; I'd be taking it."

But in Hollywood, some people are willing to trade their health to be thin. Celebrities and models are dissected on the red carpets and runways and face a lot of pressure to look perfect.

"If you're thin, you're successful," said Ken Baker, West Coast executive editor at Us Weekly. "It has become this epidemic that you have to be thin, and too thin is never thin enough."

"It's brutal, Hollywood is brutal," Warner said. "It's getting very intense because the competition between especially young actresses is so extreme."

Scarlett Pomers, who starred on The CW sitcom "Reba," is recovering from an eating disorder and says many young actresses feel they have to get skinny if they want to work.

"I definitely have heard horror stories from other actresses and actors, too, that have been told, 'Well, lose 15 pounds and you can get the part,' " she said. "It really just puts you in this place where you kind of don't know what's normal or not."

"A lot of these women in Hollywood are under such extreme pressure that they'll go to extreme measures to get the look they want," Baker said.

Ashley Mayer is a former Los Angeles fitness model and started using Clenbuterol while she was posing for magazine covers.

But Mayer said she soon found out the truth about Clenbuterol. It backfired and ruined her metabolism. Meanwhile, she became addicted to the drug as she tried to recapture her initial weight loss.

"Clen stops working. It stops having the same effects that it had on me previously, and then you get frustrated and you wonder why it's not. So, if one's good, two is better," she said. "So you take more Clen."

Mayer eventually crashed. She became depressed and packed on more weight. In fact, she put in 50 pounds in the eight months after she stopped taking Clenbuterol.

"Once you see yourself the way I saw myself physically, it's very hard to look in the mirror, and not be that anymore," she said. "It was 30 pounds more than I'd ever been in my entire life."

Though there are no hard numbers on the use of Clenbuterol, sources say it's growing.

Depandi traveled to Tijuana's pharmacy row with a hidden camera and found that pharmacies there can sell Clenbuterol at their discretion. Some ask for a prescription but Depandi said of the six pharmacies she tried, six sold her the drug without hesitation.

Mayer left L.A. and moved to Toronto to study medicine. Her system is starting to mend, though her metabolism has not been the same, and no matter how hard she works, she cannot lose weight.

"It's taken everything from me. It's taken over a year to try to rebuild," she said. "When I was skinny I was an empty box wrapped in beautiful paper and had nothing inside of me. And now I'm trying to be a semi-full box wrapped in newspaper. So I'm working on it."