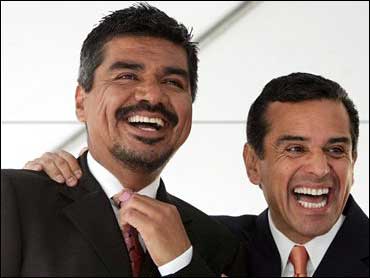 But when it comes to immigration reform — a controversy in Hollywood's own backyard — the stars have largely been unseen and unheard.

Fear of career damage, confusion over a complex issue abruptly supercharged by waves of nationwide protests and historic detachment from Hispanic realities are among the explanations offered by industry insiders and observers.

Not that the movement has needed famous standard bearers — it has been notable for its bottom-up genesis that has left it without recognizable leaders.

Still, there are no good excuses for the celebrity vacuum, Hispanic rights groups contend.

"I remember the civil rights struggle, when we had people like Harry Belafonte coming forth and being at the head and knowing the subject matter really well," said Alex Nogales, president of the National Hispanic Media Coalition. "We're missing that here."

Do famous Hispanics have a moral obligation to get involved?

"Of course," Nogales said. "This is part and parcel of being a Latino and having the responsibility to safeguard our community. The more visible ones have to take a stand. They can't always be safe."

There have been only scattered celebrity sightings at marches, with Academy Award-nominated actor Edward James Olmos (the new HBO movie "Walkout," "Stand and Deliver") the best known.

A few other prominent Hispanics, including actor-comedian George Lopez and filmmaker Gregory Nava, candidly address the public debate and the role they will — or won't — play.

"I agree with them (Hispanic advocates) in saying we should get involved," Lopez told The Associated Press. "I think the thing that frightens Hollywood right now is it's such a powder keg - they're afraid of getting burned, as public figures."

For Olmos, his involvement represents yet another chapter in a lifetime of activism. He considers the immigration issue central to the crucial debate over humane economic treatment of people worldwide.

"I think it's important (to get involved) because of the complexity of the issues that are involved," he said. "I wish there was a simple answer to this but I think both sides have to come to terms with the realities of what we're facing."

Another prominent activist of Hispanic background, Martin Sheen, was away after wrapping "The West Wing" and unavailable, his agent said. Sheen has been a highly visible supporter of immigrants' rights in the past.

Sarandon, Ed Begley Jr. and Ed Asner, all known for their political outspokenness, were contacted for interviews but either were unavailable (in Sarandon's case) or did not return phone calls or e-mail requests.

Lopez, among television's best-known Hispanics as star and executive producer of ABC's comedy series "George Lopez," said that what gives him personal pause is the intricacy of the issue, which has stymied Congress as well as the average citizen.

And in an industry that has only begun to crack the door for Hispanic talent, Lopez's success can't help but seem vulnerable to fallout from political activism.

The equation is different for Hispanic performers who have gained fame through Spanish language media. A publicist representing stars from Univision, the popular Spanish-language network, called the National Hispanic Media Coalition to offer their services.

There are risks in speaking out politically, acknowledged former "M-A-S-H" TV star Farrell, and that may preoccupy some celebrities who have a history of activism.

"There are some people, who have been battered and beaten as a result of their opposition to the war," said Farrell. "I think they are a little less willing to stick their heads out from their shells."

The people-powered protests have made celebrity involvement seem inconsequential, added Farrell, who said he's taken part in immigration-related events in recent months, including a protest against the Minuteman Project civilian border patrol group.

Olmos refused to criticize colleagues who haven't spoken up.

"Everybody has to deal with their own situation and their own insights and own feeling about their passion," he said. "I'm sure everybody is trying to do the best they can."

There are other ways to engage in and influence social debate besides marching, said writer-director Nava, whose "El Norte" (1983) was a landmark depiction of the forces pushing people north across the U.S. border and the dangers they face.

"As a filmmaker, I can put a face and a heart and a soul to these numbers and statistics, these `shadows' in our society, people from all over Mexico, Latin America, that are here to work," said Nava. "I feel the most powerful thing filmmakers can do is make movies."

Lopez is considering that path — it's possible, he said, an immigration story line may pop up on his sitcom next season.

Nava, who created the Hispanic TV saga "American Family" and is completing the upcoming film "Bordertown" with Jennifer Lopez and Antonio Banderas, suggested it may be premature to call out Hispanic artists for their lack of activism. Everyone was staggered by the protest turnouts, he said, and predicted other stars will join in time.

One person unsurprised by the white-dominated industry's inability to connect with the issue is Lisa Navarette, spokeswoman for the National Council of La Raza, a Hispanic civil rights organization.

Stars jump into debates over global warming and the Iraq war because their friends and peers are talking those subjects up, Navarette said. Most in the industry don't deal with Hispanics beyond their presence as domestic help.

"You drive by your gardener, you walk by your maid, but you're not necessarily connected to them in any way," she said.
By Lynn Elber