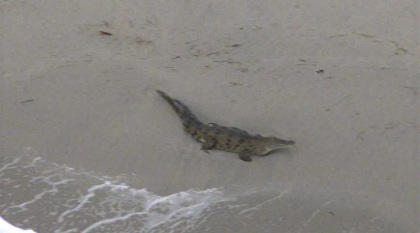 For quite some time, the crocodile wasn't moving. It was just letting the surf lap over it.

A growing crowd of curious people snapped selfies with the reptile in the background. Police kept them from getting too close, and Florida Fish and Wildlife was contacted.

Hours later, crews successfully caught the crocodile. A trapper lassoed the animal along the boardwalk where Hollywood Beach ends.

The American crocodile -- which is listed as an endangered species in the U.S. and the State of Florida -- lives in coastal areas throughout the Caribbean with the northern end of their range in South Florida.

Crocodiles are shy, reclusive animals who live in brackish or saltwater areas. They are occasionally found inland in freshwater areas of the southeast Florida coast as a result of the extensive canal system.

Researchers estimate there are only 400 to 500 crocodiles living in Florida.

Authorities did not say what will happen to the now captured crocodile.