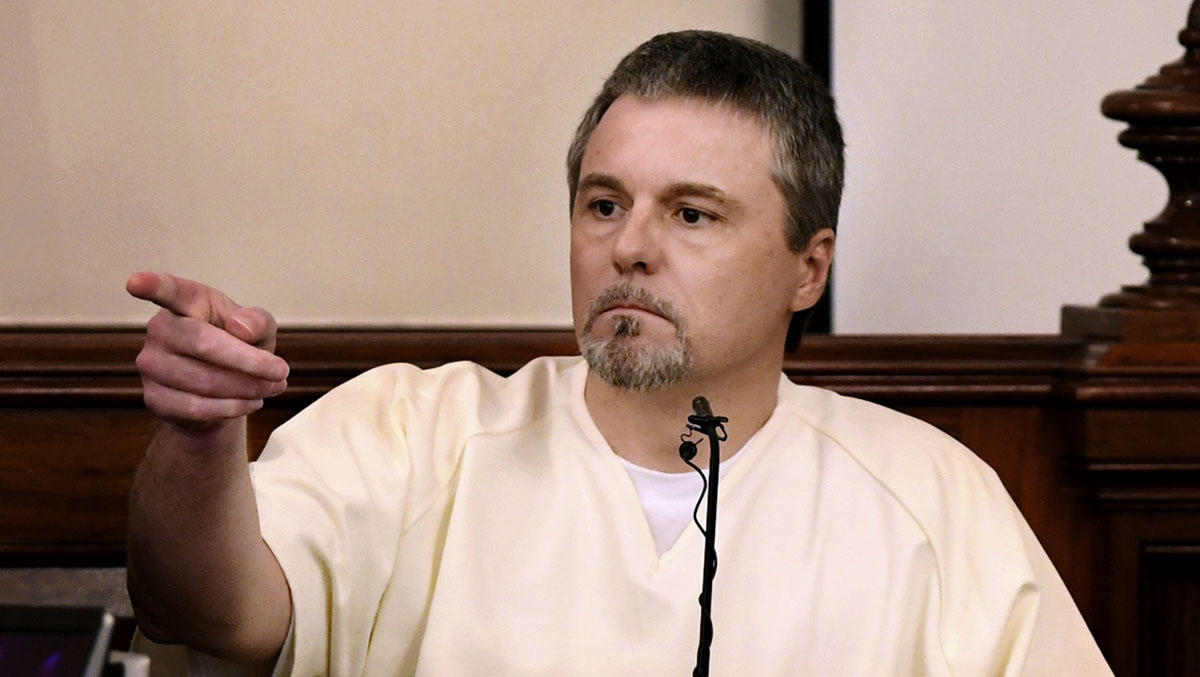 SAVANNAH, Tenn. - The man standing trial in the slaying of a Tennessee nursing student fatally shot the woman, then attempted to keep the killing a secret despite obvious "cracks" that were initially missed by investigators, a prosecutor said in closing arguments Thursday.

Zachary Adams, 33, is charged with kidnapping, raping and killing 20-year-old Holly Bobo on April 13, 2011, and could face the death penalty if convicted. A jury of six men and six women began deliberating his fate on Thursday afternoon after closing arguments wrapped up.

The jury deliberated for three and a half hours Thursday before breaking for the night. They returned Friday morning to continue. They had not reached a verdict as of early Friday afternoon.

In closing arguments Thursday, prosecutor Paul Hagerman said the testimony of star witness Jason Autry, who told jurors he helped Adams move Bobo's body, points to Adams' guilt. Autry said he saw his friend Adams the day of Bobo's disappearance to buy a morphine pill, and Adams showed him a body wrapped in a blanket in a truck.

Autry testified Adams said it was Bobo, and asked him to help bury it.

Autry said he drove with Adams to a river and helped unload the body from the truck, but when she made a sound -- indicating she was still alive -- he served as a lookout as Adams shot her.

"She was never gonna come out of that blanket alive, not a chance," Hagerman said. "[Autry] knew just how guilty he was, just how guilty they all were – and for years, he kept his secret."

In the courtroom gallery, Bobo's father Dana was seen putting his arm around her mother Karen as Hagerman spoke, local media reported.

Hagerman said Autry eventually came clean to investigators, when in late 2016, he "just told" his story.

But a defense attorney countered in a more than two-hour closing argument that the state's case is "absolutely full of holes" and is based on "non-evidence" against her client. Jennifer Thompson said Autry, who is also charged in the case, made up a story three years after his 2014 arrest and "sold" it to the government in hopes of avoiding the death penalty.

"He sold it to them, and the only price he had to pay was this tall tale he came up with in January," Thompson said.

Autry was on the list of witnesses who had been offered immunity in the case. Autry said he was seeking leniency in return for his testimony.

Bobo's disappearance from Parsons sparked a massive search and the case received national attention. The Tennessee Bureau of Investigation has said the investigation was the most exhaustive and expensive in the agency's history.

Bobo's brother Clint testified that he saw an unidentified man wearing camouflage leading his sister into woods behind the family's home. Prosecutors said Adams was involved in the "dark world" of methamphetamine and morphine when he and two other men abducted Bobo, held her against her will, raped her, killed her and hid her remains.

Autry and Adams' brother, John Dylan Adams, also are charged with kidnapping, raping and killing Bobo. A fourth man, Shayne Austin, was also charged in the case. Austin had reached an immunity agreement that depended on Bobo's body being recovered from the place where Austin said it was buried.

The deal was rescinded after prosecutors said he wasn't truthful. Austin was found dead in a Florida hotel room in what police said was an apparent suicide in February 2015.

In his closing argument, Hagerman said it was Austin who walked with Bobo into the woods. Then Austin and the Adams brothers raped Bobo in Austin's grandmother's barn, Hagerman said.  Autry said Adams used graphic details when he told Autry that he, his brother and Austin raped Bobo.

The names of all four men had surfaced early in the investigation, Hagerman said, but a former Tennessee Bureau of Investigation lead detective became convinced a sex offender was responsible for the killing and "didn't listen" to the clues that pointed to Adams as the killer.

The former TBI agent, Terry Dicus, testified he had ruled out Adams as the person who had kidnapped Bobo. Dicus was placed on desk duty and barred from pursuing leads in the case in 2013. TBI agent Jack Van Hooser testified that Dicus "needed to be benched" because he had lost objectivity.

A U.S. Marshals inspector testified for the defense on Wednesday that the sex offender, a man named Terry Britt who lived near Bobo, said he would plead to charges in the case a year before Adams was charged. The defense attempted to portray Britt as a possible alternate suspect, but in his closing statement, Hagerman said Britt was investigated and ruled out.

"There was absolutely nothing, not a drop of blood, not a hair, not anything at all that connected him to Holly Bobo," Hagerman said.

Hagerman also pointed to incriminating statements Adams made to friends and jail inmates about Bobo.

Friend Anthony Phoenix used an expletive to describe how Adams told him that he "couldn't have picked" a prettier woman. Christopher Swift said Adams asked him if God would forgive him for the "Holly killing," while they were both jailed together.

Another jail inmate, Shawn Cooper, said he spoke with Adams as Cooper awaited transfer from the Chester County Jail to the Obion County Jail.

Cooper said Adams told him his brother was being held in Obion County Jail. Adams then asked him to relay to his brother that he should stay quiet about the Bobo case or he would "put him in a hole beside her," Cooper said

Hagerman argued that Autry's story had been "corroborated, corroborated, and corroborated again" by testimony.  But defense attorney Thompson said Autry already knew of evidence accumulated in the case and could have used that to pepper his story with elements of truth. She said Autry was too street smart to allow himself to be manipulated into helping Adams dispose of Bobo's body even though he says he wasn't involved in the rape, abduction or murder.

She said a rational person "wouldn't automatically put themselves in the middle of a murder with a dead body if they don't have to."

Thompson also challenged several details of his story, including that Autry said Bobo had been laid on her back when Adams stood over her and opened fire. A medical examiner testified that Bobo's remains showed an entrance wound in the back of her skull, and Thompson said there was no physical evidence showing that Bobo was shot and killed at the river.

Thompson said there's no question that people involved in the case are "talkers" and noted that Adams was a meth user.

"Zach Adams has said some stupid things over the years," Thompson said. "That does not mean he killed Holly Bobo."