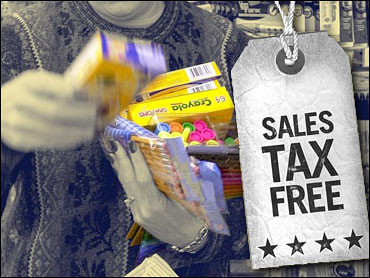 No tax holidays here -- for now

Back-to-school shoppers in Missouri, Iowa and several other states got a break last weekend: No sales tax was charged on clothes and, in some cases, school supplies and computers.

Eleven states and the District of Columbia now have short-term sales tax holidays in place during the heaviest school shopping days, and two more will join the list next year.

Soina Manzanera of Wichita would welcome some relief. She and her husband, a mechanic, have four kids in school, ages 6 to 14. Finances get extra tight when the kids go back to school. "There's uniforms, shoes, clothes, backpacks," she said. "At the very least, we spend more than $300 just to start the year."

On that total, she would save about $16 with a tax holiday. That assumes that the holiday would apply only to the statewide 5.3 percent sales tax and not to Sedgwick County taxes that push the local rate up to 7.3 percent.

So far, no Kansas legislators are pushing for a tax holiday. Three years ago, the Senate passed a sales tax holiday as part of a bill to increase some taxes, but it didn't pass the House and never became law.

Since then, Missouri has adopted its tax holiday, and retailers advertised heavily this year, particularly in the Kansas City market, to lure shoppers across the state line. That could put the issue back on the legislative agenda in Kansas. If Kansans do get a sales tax holiday, it will be over the strong objections of the state's tax chief, Revenue Secretary Joan Wagnon.

"They're great bumper stickers and great ads, but they're horrible tax policy and they don't deliver relief to people who need it," she said.

Real relief, Wagnon said, would come from reducing or eliminating fees that school districts increased when state funding for schools was frozen during the recent lean budget years.

Kansas shoppers would have saved an estimated $6.9 million under the sales tax holiday included in the 2002 Senate bill -- savings that would have been far outweighed by the sales, gasoline and cigarette tax increases that year.

Last year, legislative researchers estimated that a seven-day, clothing-only sales tax holiday would save shoppers $6.9 million. Adding computers would boost the savings by another $3.6 million.

The revenue lost to the state would represent a little more than one-half of 1 percent of the $1.8 billion a year generated by the sales tax.

So far, Kansas business groups have not pursued a tax holiday, as the Iowa Retail Federation did in pushing a two-day clothing exemption bill through that state's Legislature in 2000. "I don't know that we have ever discussed it," said Bernie Koch, lobbyist for the Wichita Area Chamber of Commerce.

The Kansas Chamber of Commerce is taking a look at the issue in the wake of the Missouri advertising blitz this year, spokesman Jim Gregory said."Anything we can do to stimulate business in Kansas, from the Kansas Chamber's perspective, is a positive thing," he said. "But honestly, it hasn't really been talked about until very recently."

Missouri tax officials have not attempted to calculate the impact of the state's three-day tax holiday, spokeswoman Maura Browning said. Studies by two outside groups came to different conclusions, she said.

Texas' state comptroller estimated a $47 million savings for shoppers there this year.

Tax-exempt goods are limited to clothing, school supplies and computers under the Missouri law. Stores selling those items must reprogram cash registers to remove the sales tax for the three-day period, which was Friday through Sunday.

"Too many lawmakers don't have a concept what retailers have to go through to be one of the largest tax collectors in the state," Overfelt said.

Plus, in Missouri's case, cities and counties can choose whether to collect their local sales taxes during the holiday, and many of them did.

Local governments don't have that option in Iowa. They do in Texas, but the one suburb that did collect its tax gave in to political pressure after one year, said Chuck Courtney, president of the Texas Retailers Association.

Kansas cities would push for an opt-out provision if lawmakers consider a sales tax holiday, said Don Moler, executive director of the League of Kansas Municipalities. "We've never been convinced that a sales tax holiday makes any sense in the first place," he said.

Retailers in tax-holiday states, however, have combined tax holidays with their own price cuts to generate more customer traffic than normal at midyear, officials say."They love it. They think it really works to get customers in the store," Overfelt said.

Rep. Kenny Wilk, R-Lansing, chairman of the House tax committee, said no one has brought the issue up in recent years. Sales tax holidays are not among the six topics assigned to the interim House-Senate tax committee this year.

But living well within the Kansas City media market, he saw the "fever pitch" that accompanied Missouri's tax holiday this year."It's more of a marketing ploy than anything else," he said. But he acknowledged it does have political appeal."It's an expense that everybody has if you have kids in school."

Sen. Les Donovan, R-Wichita, vice chairman of the Senate tax committee, said the prospect of additional court-ordered school funding "probably precludes us looking at any tax reduction, much as I hate to say that."