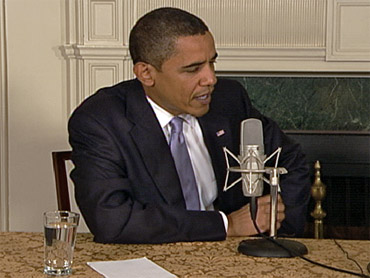 
President Obama is plunging in the polls, and his health-care plans face an iffy future on Capitol Hill. His supporters blame right-wing muscle. "I think it is very hard because [Democrats] don't have the message machine the Republicans do," says Democratic message guru George Lakoff.

Even at the GOP's 2004 peak, rumors of its omnipotence were greatly exaggerated. Now they are just plain loopy. Democrats hold daunting advantages that American parties have seldom enjoyed.

Start with Congress. A few years back, House Democrats complained that the Republican majority was shutting them out of the legislative process. Now Speaker Pelosi and company are pulling tricks that Tom DeLay never dreamed of. A study concludes: "The number and percentage of restrictive rules used by Democratic leaders to control debate and amending activity on the House floor exceeded the degree of control and departure from regular order exercised by their Republican predecessors." The ruling party is even unfairly censoring Republicans' official mailings to constituents.

Senate Democrats have 60 votes, enough to close debate if they all hang together. Such strength is extraordinary. Democrats claim that their majority is less decisive than it seems because they are more fractious than Republicans. But they aren't. In roll call votes during 2008, Senate Democrats scored higher in party unity (87 percent) than Republicans (83 percent).

Democrats do not exactly face a hostile media environment, either. The evening news broadcasts of the Obama-friendly Big Three networks have dropped in the ratings, but they still draw far more viewers than Fox News. That's why the Gibson and Couric interviews could do so much damage to Sarah Palin.

What of all-powerful talk radio? Rush Limbaugh reaches up to 25 million Americans, many more than other syndicated hosts. That's a big number, but it means that at least 80 percent of voters are not listeners. More significant, polls show that most Americans have a low opinion of El Rushbo. So the "Limbaugh Did It" theory works only if he can mesmerize millions who dislike him and/or don't even listen to him.

Liberals and Democrats also dominate the hot medium of our time, the Internet. During the 2008 campaign, the Obama campaign mastered social networking and other online technologies. By far the most popular political blog is The Huffington Post. Along with Talking Points Memo and others, HuffPo conducts a great deal of investigative journalism that advances liberal causes. As the Politico reported last year, the Right lags badly in this regard.

What about money? According to stereotype, the well-heeled GOP can bury the Democrats in campaign cash. That image is obsolete: Any Republican financial advantage is long gone. In 2008, Barack Obama smashed all fundraising records and got most of his money from large donors.

He raised twice as much as McCain from physicians and other health professionals, and three times as much from the health-service and drug industries. And listening to his attacks on the insurance industry, you would never guess that it supplied him with almost as much money ($2.3 million) as it did McCain ($2.4 million). No wonder Obama could co-opt business opposition to the health plan and strike a deal with Big Pharma: His corporate ties were a pre-existing condition.

The Democrats continue to hold the money edge. So far in the 2010 election cycle, Democratic national committees have raised $12 million more than their Republican counterparts.

And as in the past, liberals have the upper hand at foundations and universities. Research from these institutions has been especially important during the health-care debate. A Yale professor, for instance, devised the "public option."

With such a commanding position, President Obama and his party should be having an easy time. Indeed, they may still ram a bill through Congress. But the battle has been tougher than they expected. There are a couple of possible explanations. First, despite his talents as a candidate, President Obama is showing weakness and inexperience as a chief executive. Second, the health plan is so bad that even a mighty political operation has trouble pushing it across the finish line.

Perhaps both explanations are true.