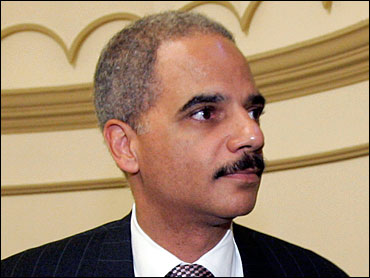 After some initial hesitation, Holder has now told the Obama team he wants the job, reports CBS News.

But it's not a completely done deal yet as he's still being vetted by the transition team's layers, reports CBS News correspondent Chip Reid.

Aides have gone so far as to ask senators whether he would be confirmed, an Obama official and people close to the matter told the Associated Press on Tuesday. A source close to the selection process told the Associated Press on Wednesday that Mr. Obama has "informally" offered the post to Holder, who has accepted. The person spoke on condition of anonymity because no announcement has been made and because the process of vetting the nomination is still going on.

Holder, a former U.S. attorney who served as the No. 2 official in the Justice Department under President Bill Clinton, would be the nation's first black attorney general.

Holder did not return messages seeking comment Tuesday. Asked Monday by The Associated Press whether he expected to be nominated, he responded in an e-mail: "Who knows?"

"He's a smart, safe choice," CBS News legal analyst Andrew Cohen. "He knows Washington and won't be intimidated by its politicians and lobbyists. He has background in terrorism law and he's a very serious and cautious guy and I think all of those traits should help him do a job that has gotten a lot harder since 9/11."

"He's not a 'change' nominee but I think you could argue that of all the cabinet-level positions, the one which needs an insider most is Justice - it's just too complex and complicated to trust to a political novice," Cohen added.

In the past week, Obama aides have asked Senate Republicans whether they would support Holder. In particular, the aides questioned whether Holder's confirmation would be delayed because of his involvement in the 2001 pardon of fugitive Marc Rich by Clinton at the end of his presidency.

One person involved in the talks said the Obama team has received some assurances that, while the Rich pardon would certainly come up during hearings, the nomination likely wouldn't be held up. All spoke on condition of anonymity to describe private conversations.

Sen. Arlen Specter of Pennsylvania, the top Republican on the Senate Judiciary Committee, said the pardon "would be a factor to consider."

"I wouldn't want to articulate it among the top items but it's worthwhile to look at," he told reporters.

Asked if Holder would be a good choice for attorney general, Specter said it was too soon to say.

"I know something of Holder's work in the Clinton administration and that's about it," he said. "I'd have to take a much closer look at his record and talk to him and think about it."

A spokeswoman for Senate Judiciary Chairman Patrick Leahy said the Vermont Democrat has not been informed that Holder is Mr. Obama's pick to lead the Justice Department.

On the last day of Clinton's term, Holder was asked whether the president should pardon Rich, a wealthy commodities dealer who had spent years running from tax charges. Holder said he was "neutral, leaning toward favorable" on the pardon. Clinton later cited that as among the factors that persuaded him to issue the pardon.

Holder has publicly apologized for what he said was a snap decision that he should have paid more attention to. Had he taken more time to review the case, he would have advised against a pardon, he said.

Holder, 57, also a former judge and U.S. attorney in Washington, is widely respected in legal circles and among Justice Department career lawyers. He has been on Mr. Obama's short list to be attorney general since before the election, and already has had private conversations about how he would run the department.

One of his top priorities, according to a person familiar with his thinking, is to rebuild the department's reputation after its fiercely independent image was tarnished by charges of political meddling by the White House during the Bush administration.

For that reason, Holder has been reluctant to lobby for the attorney general's post for fear the Rich pardon would invite a bloody nomination process and further strain the department's credibility, this person said.

Holder has been one of Mr. Obama's most trusted advisers. He was a member of the team that helped select Sen. Joe Biden as Mr. Obama's running mate. The two have known each other only briefly, however, after meeting at a dinner party four years ago.