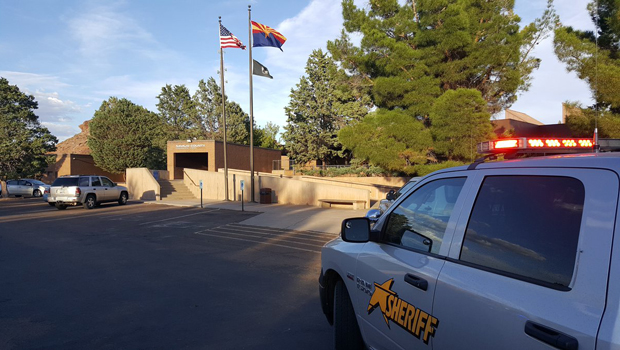 County sheriff's deputies and local law officers responded to the courthouse in Holbrook late Tuesday afternoon and found the two women, both of whom died from their wounds.

Wolfe said the third victim suffered a leg wound, but no further details on that individual or the injury were immediately available.

"This was an unfortunate situation, but our top objective was to protect the employees and citizens inside the building," Navajo County Sheriff KC Clark said in a news release.

Officials said no employees were hurt.

Investigators did not provide further details about the hearing or the dispute.

"We don't know the specifics of it," Wolfe said. "It appears to be a personal motive. This is not a mass shooting attempt."

The names of the victims and the suspect were not released.

The shooting happened near the end of the work day when the suspect met the two victims outside near the entrance of the courthouse. The gunfire prompted officials to lock the building down.

The suspect was apprehended uninjured on the south side of the complex and the lockdown was ended.

Members of the Navajo County homicide task force were at the courthouse late Tuesday combing over the crime scene.