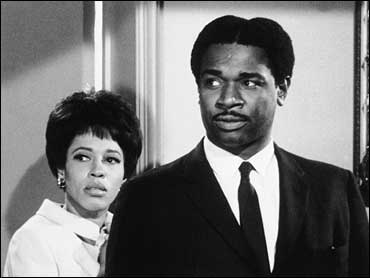 Ivan Dixon, an actor, director and producer best known for his role as Kinchloe on the 1960s television series "Hogan's Heroes," has died. He was 76.

Dixon died Sunday at Presbyterian Hospital in Charlotte after a hemorrhage and of complications from kidney failure, said his daughter, Doris Nomathande Dixon of Charlotte.

Actor Sidney Poitier said the two men became friends after Dixon was his stunt double in the 1958 movie "The Defiant Ones."

"As an actor, you had to be careful," Poitier said in a statement. "He was quite likely to walk off with the scene."

Dixon began his acting career on Broadway in plays including "The Cave Dwellers" and "A Raisin in the Sun." On film, he appeared in "Something of Value," "A Raisin in the Sun," "A Patch of Blue," "Nothing But a Man" and the cult favorite "Car Wash."

But he was probably best known for the role of U.S. Staff Sgt. James Kinchloe on "Hogan's Heroes," a satire set in a German prisoner-of-war camp during World War II. Kinchloe, in charge of electronic communications, could mimic German officers on the radio or phone.

While her father was most proud of work in plays such as "A Raisin in the Sun" and for films such as "Nothing But a Man," he had no mixed feelings about being recognized for the role of Kinchloe, his daughter said.

"It was a pivotal role as well, because there were not as many blacks in TV series at that time," Nomathande Dixon said. "He did have some personal issues with that role, but it also launched him into directing."

Dixon also earned an Emmy nomination for his performance in the CBS Playhouse special "The Final War of Olly Winter."

In addition to acting on television, he also directed hundreds of episodic shows, including "The Waltons," "The Rockford Files," "Magnum, P.I." and "In the Heat of the Night."

His honors include four NAACP Image Awards, the National Black Theatre Award and the Paul Robeson Pioneer Award from the Black American Cinema Society. He was a member of the Academy of Motion Picture Arts and Sciences, the Directors Guild of America, the Screen Actors Guild of America and the Black Filmmakers Hall of Fame.

In addition to his daughter, survivors include his wife of 53 years, Berlie Dixon of Charlotte, and a son, Alan Kimara Dixon of Oakland, Calif. Two sons, Ivan Nathaniel Dixon IV and N'Gai Christopher Dixon, died previously.

At Dixon's request, the family said, no memorial or funeral is planned.