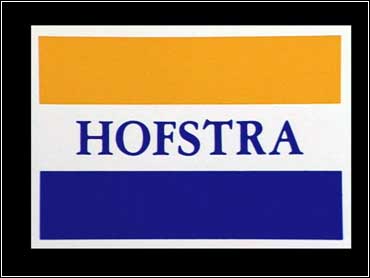 The cutting down of championship nets is one of college basketballs oldest traditions. Almost always, the last strand goes to the head coach.

Coach Jay Wright left one strand on the rim Saturday, and that went to Craig "Speedy" Claxton, the Flying Dutchmen's only senior and the player so respected by the locals that many people call the brand new Hofstra Arena "the house that Speedy built."

Claxton had 24 points and Norman Richardson had 26 as Hofstra (24-6) earned its first NCAA bid since 1977 with a 76-69 victory over Delaware in the American East championship game.

"I knew Speedy would be crushed if he left this program without going to the NCAA tournament," Wright said. "He started this. He built this."

The two-time conference player of the year was selected the tournament's outstanding player. A hometown product from Hempstead who stayed home despite offers from big-time college programs, Claxton now has what he stayed home for.

"This is what I came here to do and I'm glad we've finally done it," he said. "It will all probably sink in tomorrow when we watch the selection show and see our name on the screen. This is a perfect way to go out. I think I've had a great career here and now I can leave happy knowing I've accomplished what I wanted to do."

The victory was top-seeded Hofstra's seventh straight and 17th in 18 games. The Dutchmen have won 26 straight at home, the last 10 in the new on-campus arena, which was sold out Saturday with a crowd of 5,124.

Being the top seed meant getting the championship game at home, and for the seventh straight year and 15th in the last 16 years it turned into the leage title. The only visiting team to win the league championship game was Delaware, at Drexel in 1993.

When Wright, in his sixth season at Hofstra, was asked what he thought the biggest difference in the game was, he didn't hesitate.

"Playing at home," he said. "At the end I knew if it was close the crowd would pull us through."

This will be Hofstra's third NCAA appearance. No player on the current team was even born when Hofstra went to the tournament in 1976 and '77.

"I was a little excited in the first half," said Richardson, who had 20 points in the second half. "With six minutes left I started feeling a lot better. The shots were falling and we made some big stops."

Pegues, who averaged 20.8 points per game this season and had 19 Saturday, picked up his fifth foul with 3:36 left when he fouled Roberto Gittens who had taken a nice pass from a driving Claxton. Gittens made one of two free throws to give Hofstra the lead for good at 67-66.

Delaware closed to 72-69 on two free throws by Greg Miller with 34 seconds left, but those were the Blue Hens' final points. Richardson made his two free throws and Rick Apodaca added two more with 5.8 seconds to play.

Pegues picked up his fourth foul with 10:35 to play, and he only had two more points the rest of the way.

"My fouling out took away our inside threat and that changed some things," Pegues said. "I was surprised at all five of the fouls but that's the way it goes."

Delaware coach Mike Brey didn't blame the foul trouble but rather some trouble shooting fouls. The Blue Hens, one of the nation's top 10 teams in free throw shooting, finished 10-of-29 from the line.

"I thought we should have been better at the line and we usually are," he said. "We missed four free throws when we had a chance to extend our lead and we usually do put the dagger in when we have the chance."

Kestutis Marciulionis had 14 points for Delaware, which had won eight straight games, while Billy Wells added 13 and John Gordon 12.

Brey is hoping his team will still have at least one more game to play.