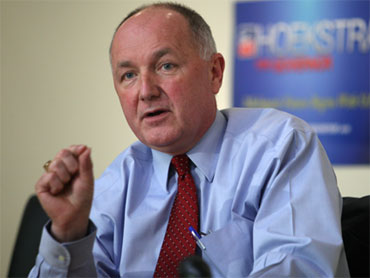 (AP Photo/Al Goldis)
The ranking Republican of the House Intelligence Committee said the U.S. needs to take more initiative against preventing terrorist attacks in the wake of a near-fatal attempt to blow up a Detroit-bound plane on Christmas Day.

"This threat is real," Rep. Peter Hoekstra, R-Mich., told "CBS' "The Early Show" Tuesday. "We need to be on offense."

Terrorist suspect Umar Farouk Abdulmutallab, a Nigerian who spent time in Yemen, brought an explosive device aboard a flight from Amsterdam to Detroit, but the device's failure to work properly prevented an aviation catastrophe.

Hoekstra said that the systems in place to track and prevent possible terrorist suspects from entering the country failed at three points, most notably at the U.S. embassy in Nigeria where Abdulmutallab's father told officials he was concerned that his son had been radicalized after spending time in Yemen.

"You would have thought this would go right to the top of the list," Hoekstra said.

On Monday, President Barack Obama said "every element of our national power" would be used to keep Americans safe, calling the attempted explosion a "serious reminder" that national security must adapt to evolving terrorist threats.