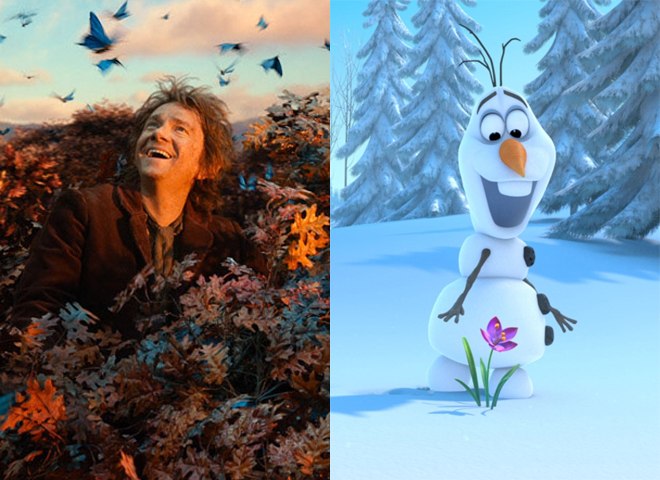 LOS ANGELES - Over the bustling post-Christmas weekend, Peter Jackson's "The Hobbit: The Desolation of Smaug" continued to lead the box office, landing in the No. 1 slot for the third weekend in a row.

The Warner Bros. prequel earned $30 million, bringing the domestic gross to $190.3 million, according to studio estimates on Sunday.

Disney's animated adventure, "Frozen," took the No. 2 position, earning $28.9 million over the weekend and $248.4 million domestically after six weeks at the multiplex.

"'Frozen' probably had the best release date of the year because they positioned themselves to completely dominate the family film marketplace over the holidays," said box-office analyst Paul Dergarabedian of Rentrak. "To be No. 2 in its sixth week is a total reflection of that."

This year is poised to be a banner one at the box office, and it is projected to surpass 2012's $10.8 billion by nearly 1 percent, making this the highest annual take ever.

Paramount held two slots in the top five over the weekend, with the comedies "Anchorman 2: The Legend Continues," starring Will Farrell, and "The Wolf of Wall Street," featuring Leonardo DiCaprio. Sequel "Anchorman 2" came in at No. 3 with $20.2 million, and Martin Scorsese's dark comedy, "The Wolf of Wall Street," took the No. 5 spot, earning $19 million after opening at No. 2 on Christmas Day with $9.15 million.

"Some people are calling the performance of 'Anchorman' a bit of a disappointment, but it will be a $100 million gross at the end of the day," Dergarabedian said. "All of the marketing certainly raised its profile. It will have a good showing."

"We are thrilled and we feel the movie will play well in theaters for a while," said Don Harris, president of distribution at Paramount. "The first film brought in $84 million, and this one will be well north of that."

At nearly three hours long, "Wolf" does not have as many showings in a day as the rest of the pictures currently in theaters, yet it's holding its own at the multiplex. "The movie is very much out there in terms of content, and that's a good thing," added Harris. "It's different than anything else in the marketplace. I think people are surprised that it's a lot of fun."

Fox's "The Secret Life of Walter Mitty," Ben Stiller's dramatic turn, which he also directed, took seventh place, earning $13 million. "'Mitty' is a feel-good film and with the combination of our excellent exit polls and audience friendly rating at PG-13, I think we are going to play well into the New Year," said Chris Aronson, president of distribution at Twentieth Century Fox. "This has been an incredibly fragmented and healthy marketplace as we're expected to finish with a record year."

And despite lackluster reviews, Keanu Reeves' martial-arts film "47 Ronin" managed to slide into the top 10 at No. 9 with $9.9 million in its opening weekend.