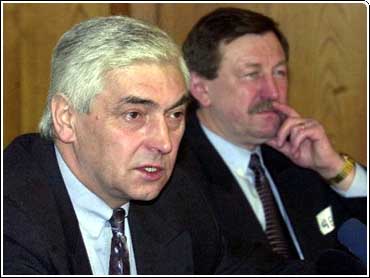 Ivan Hlinka, who built the Czech Republic national team into a gold medal-winning world power, will join the Pittsburgh Penguins as associate head coach and apparently will succeed Herb Brooks as coach next season.

The Penguins, the first NHL team to draft heavily in Europe and the first to build their roster around players from the continent, now seem intent on being the first to have a European-born coach.

Brooks, the Miracle on Ice coach of the 1980 U.S. Olympic champions, replaced Kevin Constantine on Dec. 9 and has since coaxed the Penguins back into the playoff race with a 15-11-1 record. But it has been widely known in the Penguins' organization that he did not want the job long-term.

"Herb's not going to be able to coach forever," general manager Craig Patrick said Monday. "I look at hockey ability and hockey minds and try to find strong people, and to be able to bring in someone of this caliber is excellent for this organization."

By joining the Penguins now, Hlinka can spend two months familiarizing himself with the NHL and the Penguins, nearly half of whom are Europeans. Six are Czechs, led by NHL scoring leader Jaromir Jagr, and four played for his 1998 Olympic champions.

Patrick would not confirm Monday that Hlinka will take over when Brooks steps down, but others in the organization say it's a foregone conclusion the next coach now is in place.

Jagr has often spoken glowingly about Hlinka, but Jagr also worries the 50-year-old Hlinka would get an inordinate amount of scrutiny, attention and, perhaps, criticism as the NHL's first European coach.

"He's going to be the first coach, and it's always tough for the first guy," Jagr said.

Hlinka's strengths are his ability to communicate with his players and to gain their trust, but Jagr said it was easier for him to do that in the Czech Republic because the players spoke the same language.

Hlinka's English is passable and will improve with time, according to Patrick, who said the Penguins couldn't pass up the opportunity to hire a world-class coach.

If nothing else, the Penguins now lead the NHL with two Olympic gold medal-winning coaches.

"He did a great job in Nagano, but what the most important to us is what he's done with the Czech national team since then," Patrick said. "Their program was in disarray when he took it over, and he brought it along to be the top program in world right now as far as international competition. That speaks volumes about what we think he can do."

Hlinka spent a week with the Penguins last month, talking coaching philosophies and techniques with Patrick and Brooks. At the time, the Penguins referred to him as a consultant. Patrick continued the talks over the phone after Hlinka returned to Europe to coach a Czech team in a Swedish tournament.

Hlinka will rejoin the Penguins sometime next week.

"He gets a lot of respect from the players because he gives respect to the players," said Jagr, who often bristled at Constantine's the-system-comes-first coaching style. "You've got to give the game to the players, let them know they're the key, don't just be `Me, me, me, I'm the coach.' "