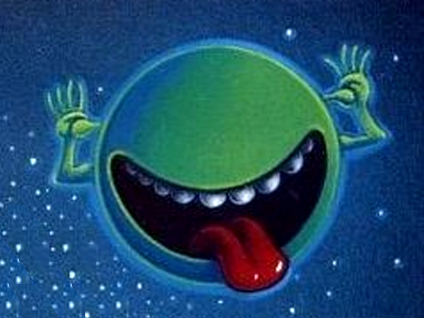 Douglas Adams' famed sci-fi radio comedy series that spawned bestselling books, a TV series and a big-budget movie adaptation is returning to Earth - this time as a live stage show.

"The Hitchhiker's Guide to the Galaxy" told of a human and his alien friend - a researcher for an intergalactic guidebook - as they traveled the cosmos following the destruction of the planet Earth. (It had been demolished by a construction fleet to make way for a hyperspace bypass.)

The series, which premiered on BBC Radio in 1978, has now been adapted for the stage, and will star the radio show's original cast members - Simon Jones as Arthur Dent; Geoff McGivern as Ford Prefect; Susan Sheridan as Trillian; Mark Wing-Davey as the two-headed Zaphod Beeblebrox; and the voice of Stephen Moore as Marvin the Paranoid Android.

"The Hitchhiker's Guide to the Galaxy Radio Show - Live!" has been adapted, written and directed by Dirk Maggs, a writer and radio producer who previously developed dramatizations of Adams' "Hitchhiker" sequel books: "Life, the Universe and Everything"; "So Long, and Thanks for All the Fish"; and "Mostly Harmless."

The tour will run from June 8 in Glasgow through July 21 in Edinburgh, with stops across the U.K.

And don't panic if you can't make it all the way to Great Britain - which is a long way away, but that's just PEANUTS compared to space - for each event will be recorded and available for download afterwards. (And you won't have to stick a fish in your ear to hear it.)