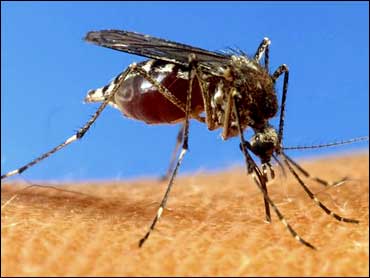 In 1975, an outbreak of the mosquito-borne St. Louis encephalitis spread through 29 states, killing 95 people and infecting almost 2,000 others. The following year, infection rates were down, and they have stayed down over the decades that followed.

Health officials expect a similar trend with West Nile virus, a related mosquito-bourne ailment that first appeared in 1999 and has killed seven people and infected more than 130 this year in its worst U.S. outbreak.

The first notable outbreak of St. Louis encephalitis occurred in 1974. The illness is still around today, but the number of cases has fallen to around 128 annually. Last year, four people died in the Monroe, La., area from the illness.

Transmission rates of both St. Louis encephalitis and West Nile are dependent on ecological and environmental factors, such as rainfall and temperature, said Sally Slavinski, an epidemiologist for the Mississippi Department of Health.

"With these viruses you need a lot of ecologic factors that are working in combination," Slavinski said. "You have to have a large mosquito pool that year of the right species."

Given the history of West Nile and related illnesses, it's not likely the outbreak will increase exponentially next year, Slavinski said.

In 1999, seven people died and 55 others were hospitalized in New York with West Nile virus. The state hasn't reported any cases this summer.

"Next year, we probably will see some (West Nile) activity, but hopefully not to the same degree, if we can use St. Louis as a model," Slavinski said.

In addition, she said, studies have shown that humans build an immunity to both St. Louis encephalitis and West Nile virus.

During the 1975 St. Louis encephalitis outbreak, Illinois, Indiana and Ohio recorded the greatest number of cases, but Mississippi had the highest case rate - one out of every 1,000 people there got the illness. In Greenville, Miss., one in every 450 residents was affected.

The death rate for St. Louis encephalitis ranges from 3 to 30 percent, according to the Centers for Disease Control and Prevention. West Nile's death rate nationally has been about 10 percent.

Bernadette Burden, a CDC spokeswoman, noted Saturday that researchers have only four years of West Nile data to work with compared to decades of numbers on St. Louis, so they don't predict where West Nile might spread.

"We do believe, based on research, that it will continue its trek west. But to say how it will impact we honestly don't know," she said.

The seven deaths linked to West Nile this year have all been in Louisiana, however officials in Mississippi are also investigating a death they say appears to be linked to the virus.

The governors of both states have declared states of emergency, opening the door to federal funding and allowing mosquito control teams to spray on private property.

Dr. Raoul Ratard, Louisiana's state epidemiologist, said the treatment for West Nile and St. Louis are about the same, and the same health precautions should be taken, including using mosquito repellents, eliminating standing water, and working with public spraying for mosquitoes.

The CDC has given $17 million to states to fight mosquitoes and said an additional $10 million would go into the battle.

"West Nile worries people for the same reason a lot of things panic people," said Craig Levy, director of the Arizona Department of Health's vector-borne disease control program. "It's new, and because it's new and exotic, it's scary. ... Take it seriously, but do not lose sleep about it."