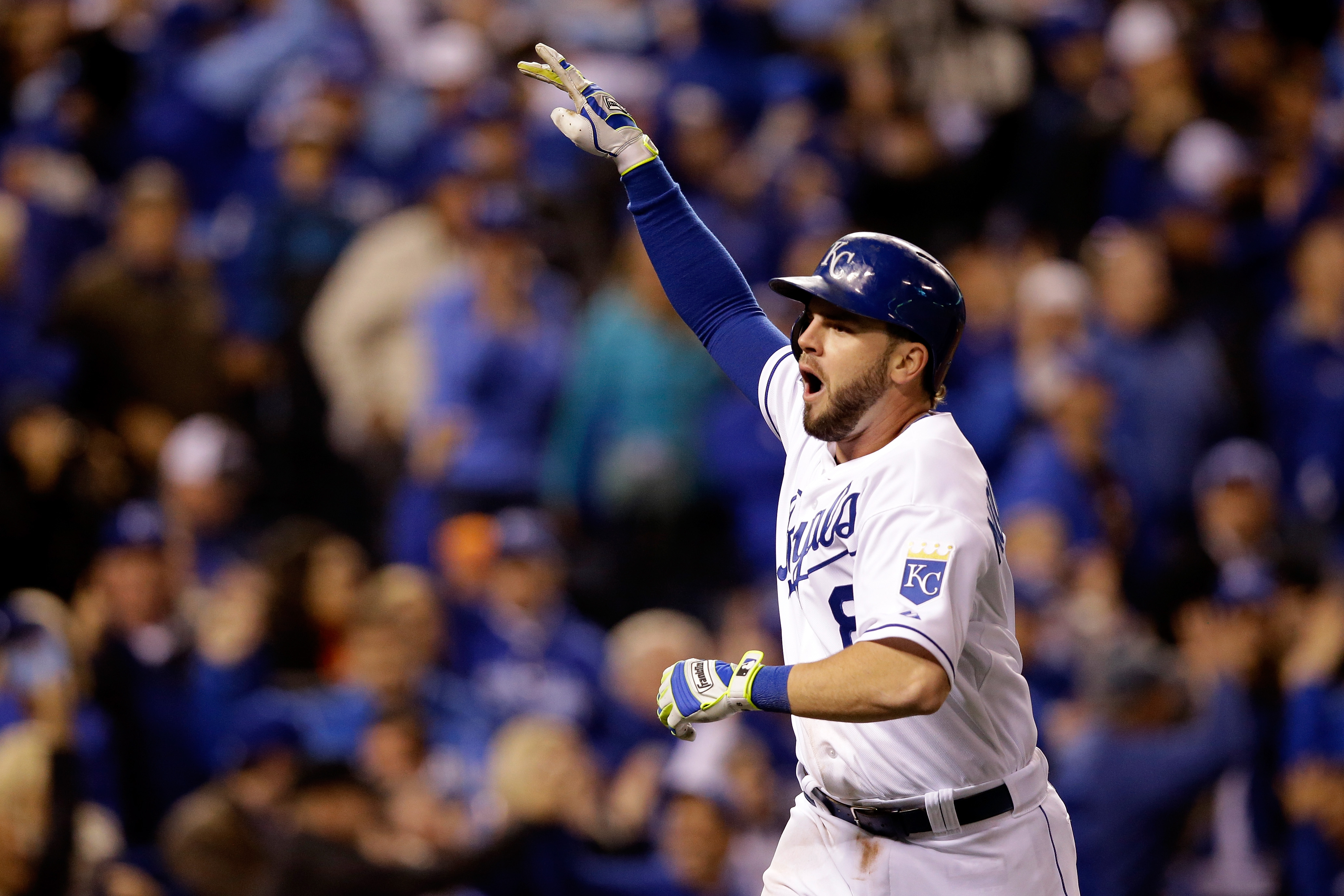 KANSAS CITY, Mo. -- The raucous roar at Kauffman Stadium swelled with every batter in the second inning and then got louder the rest of the night.

As bouncers rolled by infielders and bloops dropped in front of outfielders, it became clear this World Series was headed to a climactic Game 7 - just like the one 29 years ago when the Kansas City Royals won their only title.

Lorenzo Cain looped a two-run single - one of eight Royals to get hits in a seven-run second inning - and Eric Hosmer chopped a two-run double over shortstop as the Royals battered the San Francisco Giants 10-0 Tuesday night to tie the Series at three games apiece.

"Guys stepped up in a big way tonight," Cain said.

Jeremy Guthrie starts Wednesday night for Kansas City and Tim Hudson for San Francisco in a rematch of Game 3, won by Kansas City 3-2. Hudson, 39, will become the oldest Game 7 starter in Series history.

Lurking is Madison Bumgarner, ready to pitch in relief after suffocating the Royals on a total of one run in winning Games 1 and 5.

"We're confident," the Royals' Billy Butler said. "Jeremy, every time out, gives us a chance to win."

CBSSports.com Baseball Insider Jon Heyman writes that the series has been "so evenly played that it is downright odd. ... The difference that separates these two excellent but flawed teams is as ... Ventura, the 23-year-old rookie who's all arm. Through six games, the Giants lead in runs 27-25 and hits 58-51, the Royals lead in total bases 76-75 and home runs 3-2. If it were a political race, they would be within the margin of error."

Kansas City can be comfortable in this bit of history: Home teams have won nine straight Game 7s in the Series, including the Royals' 11-0 rout of St. Louis in 1985, since Pittsburgh's victory at Baltimore in 1979. And the Giants have lost all four of their World Series finales pushed to the limit.

"This club's so resilient. They're so tough. They'll put this behind them," San Francisco manager Bruce Bochy said. "You've come back against the odds, and you can do it again."

Teams with the home-field advantage have won 23 of the last 28 titles, including five in a row. This Series has followed the exact pattern of the only other all-wild card matchup in 2002, when the Giants won the opener, fell behind 2-1, took a 3-2 lead and lost the last two games at Anaheim.

Ventura escaped his only trouble in the third, when he walked the bases loaded with one out and then got Buster Posey to ground a 97 mph fastball into a double play. Ventura threw fastballs on 81 of 100 pitches, reaching up to 100 mph, and worked around five walks. Royals manager Ned Yost was able to rest the hard-throwing back of his bullpen: Kelvin Herrera and Wade Davis enter Game 7 with two days off and closer Greg Holland with three.

"This keeps all our big guns fresh and ready to tomorrow," Yost said.

In a Series marked by blowouts - the first in which five games were decided by five runs or more - Kansas City out-hit the Giants 15-6 Tuesday. All nine Royals had hits by the third inning, matching the mark set by Arizona against the Yankees in Game 6 in 2001.

Cain drove in three runs and was among six Royals with two hits each.

Mike Moustakas homered in the seventh against Hunter Strickland, ending a 36-inning homerless streak in the Series, the longest since 1945.

Peavy's outing was the shortest for a Series starter since the Yankees' David Wells got just three outs against the Marlins 11 years ago in Game 5, according to STATS.

San Francisco had scored 15 straight runs entering the night, but the Royals bludgeoned Peavy and Yusmeiro Petit in a 32-minute bottom of the second to take a 7-0 lead.

Singles by Alex Gordon and Salvador Perez put runners on the corners, and Moustakas grounded a double over the first-base bag, past Brandon Belt and down the right-field line for a 1-0 lead.

Peavy struck out Omar Infante and, in the night's key play, Alcides Escobar hit a bouncer to Belt. With Peavy yelling "Home!" Belt checked Perez at third and then tried to out-race Escobar to first base rather than throw to second baseman Joe Panik, who already was at the base.

Escobar slid past Belt's failed tag attempt and into first to reach on the infield hit, and Nori Aoki chased Peavy after 42 pitches with a single to left.

Petit, who had pitched 12 scoreless postseason innings coming in, allowed Cain's blooped single to shallow right and advanced the runners with a wild pitch. Hosmer chopped a ball that hopped over shortstop Brandon Crawford for a double that made it 6-0 and scored on Butler's double for a 7-0 lead.

Cain added an RBI double off Jean Machi in the third, and Escobar's run-scoring double in the fifth made it 9-0.