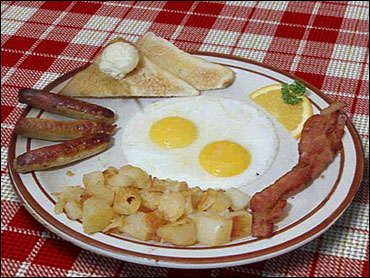 Breakfast is considered by most to be the most important meal of the day.

Many foods we consider breakfast staples are modern variations of early breakfast dishes.

On The Early Show Monday, Chris Kimball, host of "America's Test Kitchen" and editor in chief of "Cook's Illustrated" traced breakfast's evolution in the United States.

These breakfasts were simple and, like most early American cuisine, relied heavily on cornmeal, an ingredient that was used by Native Americans and influenced the cuisine of early settlers. A simple hot water cornbread was used to create a variety of different breads, including corn pone (pan-fried in oil), Johnnycakes (usually flattened and griddle-fried) and Ashcakes (wrapped in cabbage leaves and cooked in the ashes of a campfire). Hoecakes were small pancakes cooked on the flat side of a garden hoe and cooked over a campfire. Corn Dodgers were simple, oval-shaped cornmeal breads made from cornmeal, water, buttermilk, and baking powder.

The Victorian breakfast reflected the birth of the middle class, when many wealthier women had leisure time and disposable income was growing. Unlike the relatively poor settlers in our nation's past, Victorians had the money to improve the quality and range of the American breakfast table. Menus could be extensive and include a wide array of foods including hot cereal, eggs, fish, meat, breads, and fruit. A formal Victorian breakfast would be equivalent of brunch today, with items such as orange juice, Poached Eggs with Asparagus Tips, toast, lamb chops, green peas, English muffins, and crackers with Brie or Roquefort to finish with coffee.

Americans didn't start growing oats in quantity until the 19th century. Quaker Oats was registered as a cereal trademark in 1877 and, by 1885, oats were being sold in boxes, not just in bulk. "Quick Oats" were introduced in 1922, and "Instant" Oatmeal in 1966. In the 1970s, flavored oatmeal arrived. The Victorians used to cook their oatmeal forever. Marion Harland, whose massive cooking tome was published in 1903, commented, "Four hours of boiling makes oatmeal good; eight hours makes it better; twenty-four hours makes it best." The original oatmeal was made with "groats," the hulled and crushed grain itself, cut into pieces and often soaked overnight before cooking.

Kimball showed a modern recipe for Old Fashioned Steel Cut Oatmeal. It browns them in a little bit of butter, then simmers them in water for about 20 minutes. That's very different from today's rolled oats, quick oats, or instant oats, and vastly better. The groats are simply pressed through rollers and then par-cooked for the quick or instant variety.

Seventh-Day Adventists are credited with creating breakfast cereals. They founded the Battle Creek Sanitarium, where they manufactured and promoted wholesome cereals. Will Keith Kellogg was an Adventist who discovered corn flakes in 1894 when a pot of cooked wheat was overcooked and then dried. Each grain became a separate flake. He introduced Rice Krispies in 1929. The Battle Creek Toasted Corn Flake Company was founded in 1906.

Originally introduced by the Dutch as sweet dough fried in pork fat (known as "oily cakes"), the doughnut has been around a very long time, although its popularity surged with the doughnuts served to solders in World War I. The term "doughnut" either comes from the small balls of dough that looked like nuts, or a recipe from a mid-19th century cook who added nuts to the center of her fried dough and therefore referred to them as dough "nuts." The legend goes on to say that her son, a sea captain, didn't like the nuts so he had them cut out, creating the famous doughnut shape that we know today. Doughnuts remained as snacks, not breakfast -- often served in theaters -- until the doughnut machine was invented in the 1930s. By the 1940s and 1950s, Krispy Kreme and Dunkin' Doughnuts had been introduced, and the pairing of coffee and doughnuts secured their place in the breakfast repertoire. By the 1950s, "drop" doughnuts became very popular and Orange Drop Doughnuts showed up in the Betty Crocker Cookbook. Since no rolling or cutting was required -- just drop spoonfuls of batter into hot oil -- this category of doughnuts caught on quickly.

Orange Drop Doughnuts shown during the segment are quick-cooking baking powder doughnuts that require no rolling or stamping, since the dough is simple dropped into hot oil. They're finished with an orange sugar.

Barbra Streisand: What You Never Knew