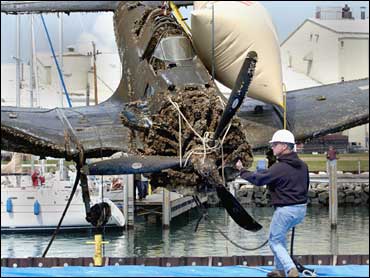 A dive bomber that had ditched in Lake Michigan on a training run in 1944 was brought to land Friday for restoration in Florida for the National World War II Museum in New Orleans.

The Douglas SBD Dauntless lifted from the water Friday to a pier in Waukegan, Ill., is among 130 to 300 or more planes estimated to have sunk in the lake during training late in World War II.

"Corsairs, Avengers, Dauntless - any number of World War II aircraft are in the water," said Capt. Ed Ellis, secretary of the foundation that supports the National Naval Aviation Museum in Pensacola, Fla., where the newly recovered plane will be restored.

Ellis puts the total aircraft sunk in Lake Michigan at more than 300. Taras Lyssenko, co-owner of A&T Recovery, created to recover those planes, thinks the number is closer to 130. Whatever the figure, they are spread over some 2,500 square miles of lake bottom.

The Dauntless is the 35th airplane plucked from the waters since the National Naval Aviation Museum began a recovery and restoration program in 1990, Ellis said.

Even the wooden antenna mast was intact, and the rest of the plane was in good shape despite decades in the water, Lyssenko said.

"It was covered with mussels, so it looks like a coral reef," he said. "But we knocked most of them off."

Lyssenko said the plane was found in the mid 1990s in more than 300 feet of water, more than 20 miles offshore. He said it took years to obtain Navy permission and secure state and federal permits to mount a recovery.

Because the plane was so deep, submarine robots were called in to survey the area - and, in recent weeks, to set up ropes used to lift the plane to the surface for towing.

He described the salvage as far more delicate than recovering a ship.

"Ships have all kinds of things you can put chains on. You can't put a chain on this," he said. And it must be lifted very gently. Otherwise, mud-filled wings might get ripped off."

To watch video from CBS Station WBBM of the plane being raised click on the player below:

Local Video from CBS 2 in Chicago

It's likely to be another 18 months to three years before that plane or another Dauntless restored by the aviation museum is ready for the World War II Museum, spokeswoman Clem Goldberger said.

"Finding World War II aircraft that actually have a combat record is a rarity," Ellis said. "We have a number here. The one that we loaned the World War II Museum has a combat record, so we wanted it back. We said, `We'll loan this one to you and we'll recover and restore another one which we'll then swap out when the restoration is finished."'

An anonymous donor paid for the work.

"It costs about a quarter-million dollars to pull one off the bottom," Ellis said.

He said the Naval Aviation Museum has 102 aircraft displayed indoors, about 60 outdoors - generally awaiting or in restoration - and more than 800 lent to about 600 museums, schools and other institutions nationwide.

The one recovered Friday ran out of fuel Nov. 24, 1944, en route back to its carrier, said Hill Goodspeed, historian and artifact collections manager at the aviation museum.

"The pilot survived. We do not recover aircraft if there was a fatality. They're considered gravesites," Ellis said.

He said many planes training in that era had flown from a pair of old paddlewheel steamers decked out as practice aircraft carriers.

Ellis said more than 17,000 pilots trained from the paddlewheelers out of the Naval Air Station in Glenview, Ill. Each needed to make about eight takeoffs and landings on the USS Wolverine or USS Sable to qualify for carrier duty.

The ships were built as multideck paddlewheel cargo and excursion boats. Ellis said authorities "cut the top decks off and put 600-foot decks on them" to allow training.

The hundreds of accidents included fewer than a dozen deaths, mostly pilots who got out safely but died of hypothermia in frigid winter waters, Ellis said.