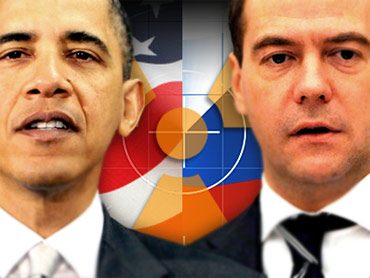 In a phone call this morning, President Obama and President Medvedev agreed to meet in Prague, the Czech Republic, on Thursday, April 8, to sign a historic new treaty between the United States of America and the Russian Federation on Measures to Further Reduction and Limitation of Strategic Offensive Arms (the "New START Treaty").

"I'm pleased to announce that after a year of intense negotiations, the United States and Russia have agreed to the most comprehensive arms control agreement in nearly two decades," Obama said in a Friday White House press briefing.

A senior administration official tells CBS News the treaty would cut by 25 percent the number of deployed nuclear weapons.

A White House statement said the treaty will limit both sides to 1,550 warheads each - about 30 percent fewer than in the previous agreement. It also limits each to 700 deployed missiles and bombers.

The statement said the accord also includes tough verification measures that will enable both sides to monitor all aspects of its implementation.

The Treaty's duration will be ten years, unless superseded by a subsequent agreement. The U.S. Senate and the Russian legislature must approve the Treaty before it can enter into force.

"With this agreement, the United States and Russia - the two largest nuclear powers in the world - also send a clear signal that we intend to lead," Obama said. "By upholding our own commitments under the Nuclear Non-Proliferation treaty, we strengthen our global efforts to stop the spread of these weapons, and to ensure that other nations meet their own responsibilities."

Dmitry Trenin, director of the Carnegie Moscow Center think tank, said Friday the treaty advances the causes of nonproliferation and nuclear disarmament, while standing as a "symbol" that U.S. President Barack Obama's effort to mend tattered U.S. relations with Russia is working.

"I think this also means that the environment of U.S.-Russia relations has improved, and I think we will feel the positive impact of that treat for some time," Trenin told the AP.

But he warned that both sides should move quickly to follow up the treaty with agreements on other thorny issues. Otherwise, he said, the new era of good feeling between Washington and Moscow "may be a short-lived effect."

The signing will set the stage for a White House campaign to win Senate ratification. The treaty also must win approval by the parliament, and the two legislative processes are likely to take months.

Robert S. Norris, a longtime analyst of U.S. and Russian nuclear arsenals, predicted that the White House could find it difficult to win Senate approval.

The signing in Prague comes about a year after Obama declared his vision of a nuclear-free world in a speech there.

The new agreement to reduce long-range nuclear weapons would replace the 1991 Strategic Arms Reduction Treaty, which expired in December.

The Moscow Treaty set limits on both sides' strategic nuclear warheads at between 1,700 and 2,200. The new deal, whose provisions have not been made public, is expected to lower that to about 1,500. It also would reduce the permissible number of strategic launchers - the missiles and bombers that deliver warheads to their targets.

Obama spent an hour Wednesday in the White House briefing Democratic Sen. John Kerry, chairman of the Senate Foreign Relations Committee, and Sen. Richard Lugar, the committee's ranking Republican. Both would play major roles in ratification of the emerging treaty.

Two senior U.S. officials in Washington said Thursday the technical issues still to be resolved were in an "annex" to the main treaty, and they foresaw no hurdles to completing the entire deal within days. They spoke on condition of anonymity due to the sensitive discussions.

Negotiations, which have been under way in Geneva since last spring, became bogged down in recent months on disputes over verification measures and Russia's objection to U.S. missile defense plans for Europe.

Russian negotiators have balked at including some intrusive weapons verification measures in the new treaty. The Obama administration has warned that without these, Senate ratification could prove difficult.

The agreement would still leave each country with a large number of nuclear weapons, both deployed and stockpiled.

Trenin said both the U.S. and Russia could use the new START treaty as a springboard to settling other thorny issues.

The U.S., he noted, is looking to Russia to back tough sanctions against Iran's nuclear program. Moscow meanwhile, wants a revival of its agreement with the U.S. on civilian nuclear power, which would help Russia establish an international nuclear fuel storage facility.

The Bush administration submitted that deal to Congress, but the White House dropped its support following the August 2008 Russia-Georgia war.

Trenin said the new treaty would also help both sides sell global disarmament initiatives in May, at a conference on the 1970 Nuclear Non-Proliferation Treaty in New York City.

In particular, it would help Obama, who has called for working toward a total ban on nuclear weapons.

"The eyes of the world are on the U.S., in particular President Obama, because he's already committed himself to nuclear disarmament," Trenin said. "He will be on firmer ground now that the treaty is virtually in hand."