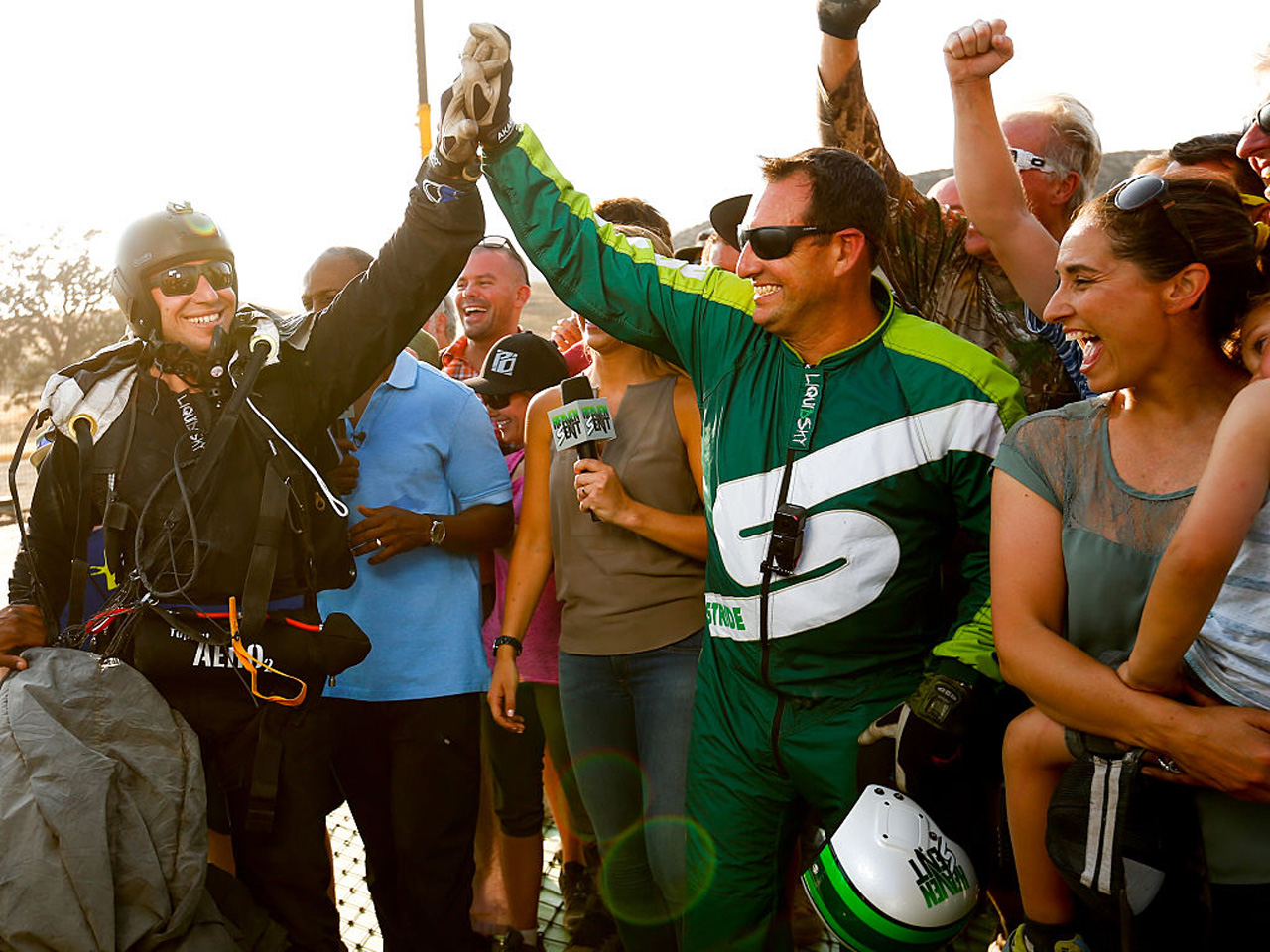 LOS ANGELES -- The idea for the historic parachute-less skydive over the weekend in California wasn't born overnight, and in fact, was two years in the making.

The 42-year-old skydiver Luke Aikins, with more than 18,000 jumps, made history as the first person to survive a leap from a plane without a parachute.

After leaping from an airplane, Aikins rocketed toward earth for two minutes, and then calmly flipped onto his back at the last second and landed dead center into a 100-by-100-foot net in California.

When his friend Chris Talley came up with the idea two years ago, Aikins acknowledged he at first turned it down cold.

"I kind of laugh and I say, 'Ok, that's great. I'll help you find somebody to do it,' " he told The Associated Press as he trained for the jump last week.

A couple of weeks after Talley made his proposal, Aikins called back and said he would do it. He'd been the backup jumper in 2012 when Felix Baumgartner became the first skydiver to break the speed of sound during a jump from 24 miles above Earth.

Aikins was able hit the net with pinpoint precision thanks to GPS alerts in his helmet and a sophisticated lighting setup on the ground that was visible from more than 25,000 feet up, Talley said Sunday. If Aikins veered off course the lights appeared red, but when he was on target they shone bright white.

"They're very similar to the lights that a pilot sees when landing a plane at an airport," Talley said.

Cheers rose from those who gathered at the Big Sky movie ranch on the outskirts of Simi Valley to watch the stunt, including his family.

As the audience erupted, Aikins quickly climbed out, walked over and hugged his wife, Monica, who had been watching from the ground with their 4-year-old son, Logan, and other family members.

"I'm almost levitating. It's incredible," the jubilant skydiver said, raising his hands over his head as his wife held their son, who dozed in her arms.

The jump -- from the death-defying altitude of 25,000 feet -- makes Aikins the only skydiver ever to go from plane to planet Earth without a parachute.

In 2012, Gary Connery jumped 2,400 feet out of a helicopter while wearing a wing suit and landed onto a pile of cardboard boxes in Hanley-On-Thames, England, without deploying a parachute. He was killed the following year in an accident in the Swiss Alps while flying a special wingsuit

The newer stunt, broadcast live on the Fox network for the TV special "Stride Gum Presents Heaven Sent," nearly didn't come off as planned when Aikins revealed just before climbing into his plane that the Screen Actors Guild had ordered him to wear a parachute to ensure his safety.

Aikins didn't say what prompted the original restriction, but SAG spokeswoman Pamela Greenwalt said the union and producers "could not come to an agreement on the safest way to pursue this stunt and therefore we could not sanction it to go forward under a union agreement."

Aikins said he considered pulling out at that point because having the parachute canister on his back would make his landing in the net far more dangerous. If he had to wear it, he said he wouldn't bother to pull the ripcord anyway.

A few minutes before the jump. one of the show's hosts said the requirement had been lifted. Aikins left the plane without the chute.

Aikins admitted before the jump he was nervous. and his mother said she was one family member who wouldn't watch.

Aikins was able to alter his course with just the slightest adjustments of his hands, said Talley, who added that experienced skydivers have "incredible control" over where they land.