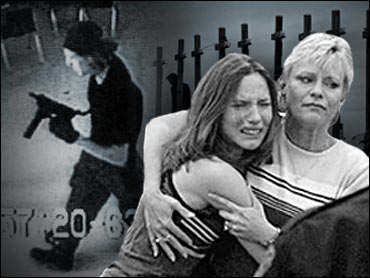 Sean Graves spent three years in a wheelchair after being wounded in the Columbine High massacre. But aided by a crutch, he walked across the stage Saturday to receive his diploma as the last class to witness the 1999 rampage graduated.

The crowd gave him a standing ovation. Graves was shot four times, leaving him nearly paralyzed from the waist down, until he began walking short distances with a crutch this year. He was wounded as he stood outside the school with a friend, Daniel Rohrbough, who died in the shootings.

The 450 close-knit graduates received their diplomas at an amphitheater south of Denver. But first they paused to remember two classmates who didn't survive the attack - Steven Curnow and Rohrbough - as well as two students who were killed during an unsolved shooting at a sandwich shop in 2000.

Inside their diplomas, graduates received a second tassel in memory of their fallen classmates.

Principal Frank DeAngelis, the only remaining administrator from the time of the shootings, thanked the class for supporting him the past three years. He apologized because they did not have a "normal high school life."

There were also signs of a typical graduation. Air horns sounded during the ceremony and one graduate mooned the crowd with a "Hi Mom" message.

The graduates lined up along the back of the amphitheater, facing the crowd, as their class song, "Bittersweet Symphony", played on the loudspeaker. Just after they threw their caps in the air, four military jets flew across the sky in formation.

On April 20, 1999, students Eric Harris and Dylan Klebold opened fire at the school, killing 12 students and a teacher before killing themselves.

Ann Marie Hochholter, who graduated two years ago and was paralyzed in the shooting, came to Saturday's ceremony to watch her brother Nathan graduate.

"They're strong kids," she said. "They stuck with it for three more years."

"They're the ones who said `We are Columbine.' It was their example that inspired the staff and the community," said Hooker, whose two sons escaped the rampage unharmed.