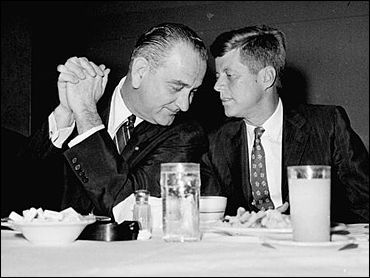 The History Channel has asked three historians to review the credibility of a documentary it aired that claimed President Lyndon Johnson was involved in the Kennedy assassination.

Former Johnson staffers and family members have been demanding an independent investigation and a retraction of the allegations in the documentary. History Channel executives said they will broadcast results of their review.

"We appreciate the decision by The History Channel to appoint three outstanding historians to investigate the accusations," said Tom Johnson, chairman of the LBJ Foundation and no relation to the former president.

He called the allegations in the documentary reprehensible and said Johnson family and former staff members will cooperate fully with the investigation.

The History Channel aired the documentary, "The Guilty Men," in November as one of several programs exploring conspiracy theories surrounding President Kennedy's death. President Johnson was Kennedy's vice president at the time of the assassination.

"Nothing is more important to The History Channel than the integrity of our programming," Dan Davids, executive vice president and general manager, said in a statement. "We take their concerns about historical accuracy and fairness very seriously and are taking appropriate action."

Davids said the station is "deeply saddened that we have caused discomfort to the former First Lady, Mrs. Johnson and her family."

Lady Bird Johnson, 91, who does not speak clearly since a 2002 stroke, was unavailable for comment. But in a letter to the television executives she described her distress over the allegations.

"It saddens me beyond words that such an outrageous charge without foundation could be aired when the men so libeled can no longer defend themselves," the letter said.

The historians reviewing the allegations are author Robert Dallek, considered an authority on the presidency; Stanley Kutler, a law professor at the University of Wisconsin and a leading authority on 20th-century American political and constitutional history; and Thomas Sugrue, an award-winning teacher and author at the University of Pennsylvania.

After the meeting, Tom Johnson said the executives expressed concern that the issue had been "ratcheted up" by letters from Ford, Carter and Lady Bird Johnson to the chief executives of NBC, Hearst Corp. and The Walt Disney Corp., which own A&E Networks.

The program was based in part on a book published in 2003 by Barr McClellan, who claims the law firm he quit a quarter-century ago was involved in convoluted plots that link Johnson to at least 11 deaths, including President Kennedy's.