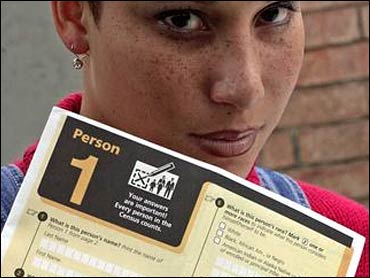 The Latino population grew to 37 million in July 2001, up 4.7 percent from April 2000. The black population increased 2 percent during the same period, to 36.1 million.

The estimates are the Census Bureau's first statistics on race and ethnicity since results from the 2000 census were released two years ago.

In places like Los Angeles, bitter political campaigns have already tested the growing influence of Hispanics. When Antonio Villaragosa ran against James Hahn for mayor, he lost because Hahn captured the unified African-American vote, while Hispanics, who come from many different countries, don't always vote the same way.

"It's not clear they all have common political thoughts and goals the way blacks have used political power," says Suro.

But their purchase power is already well known: singer Jennifer Lopez is the country's top-earning entertainer; ad dollars reached an all-time high on Spanish-language television last year; and the Latin Grammy's moved for the first time to network television.

But more than money and power, the shift in minorities can be seen in the tapestry of the American neighborhood. In Los Angeles, one study found that unlike African-Americans, who are more integrated into white communities than ever, the growing Hispanic community remains tightly knit together because of the language barrier.

Census Bureau demographer Roberto Ramirez said it has long been expected that Hispanics would someday surpass blacks because their birth and immigration rates are higher.

"And the trend shows it will clearly be increasing more in the future," Ramirez said.

Asians are the next largest minority group after blacks and Hispanics, at about 12.1 million, or 4 percent of the population.

A breakdown by state was not released.

The 2000 census, for the first time, allowed people to check off more than one racial category, increasing the number of possible choices for racial origin from five in 1990 to 63.

Population figures for black, white and Asian refer to those who are not Hispanic.