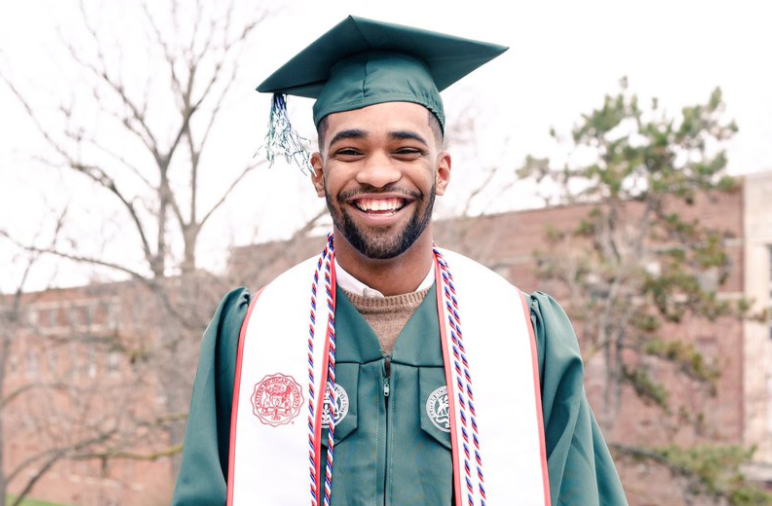 Four years ago, as Davion Reeder was preparing for freshman orientation at Eastern Michigan University, his stepfather said something that would stick with him his entire college career: "It's pointless to go to orientation, you're not going to graduate."

There have been several times over the past four years that Reeder admits he felt like giving up, but then he would think of his stepdad and those piercing words. He hoped to prove him wrong.

On Saturday, Reeder did just that. He walked down the aisle and accepted his diploma in a long green gown with smile on his face. His stepfather wasn't among the family members who were sitting among the crowd that day cheering him on.

"My step dad told me it was pointless to go to orientation, I wasn't going to graduate.....4 years later he's in jail & I'm well....," Reeder posted on Twitter, along with a photo of himself wearing the cap and gown. The post went viral with more than 600,000 likes.

The 22-year-old from Detroit is the eldest of four siblings and the first in his family to graduate college.

"I have many hard times in my life that push when I feeling like giving up," Reeder told CBS News. "However, that moment just correlated perfectly with the emotions I had during that picture."

Reeder didn't want to reveal his stepdad's name or explain the man's legal troubles, preferring to keep his focus on the future. But he does want him to know one thing: He was wrong.

After graduation, Reeder, who majored in criminal justice with a minor in military science, plans on commissioning into the Army as a Second Lieutenant.

And his dreams don't stop there.

"I currently work as a bank teller, but I one day hope to become a sexual assault victims attorney," Reeder explained. "My main goal now is to expand my mentoring program, The Nation."

Reeder never expected his graduation message to go viral. He just wanted to share his proud accomplishment with his friends.

But for those who do happen to hear his story, he hopes they'll learn from it.

"Don't be afraid to fail and continue to preserve through the hard times," he advised.