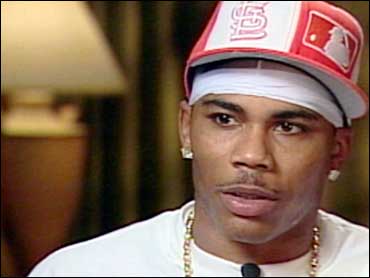 Rap star Nelly has been on a roll recently.

Not only does he have two hit albums and a Grammy Award, but he is also starting a new line of clothing named Applebottoms. But all his success has been overshadowed by his half-sister's continuing fight with leukemia.

The Early Show co-anchor Rene Syler spoke with the rapper about his efforts to help her get well.

"You definitely think the worst when you hear stuff like that," says Nelly, "Because, you know, I'm ignorant to the fact of leukemia."

But, he received a quick education on the disease.

But Donahue's situation took a turn for the worse when she learned that her chemotherapy wasn't working and she would need a bone marrow transplant.

"I'm just imagining how they're feeling. You know, they may not have a lot of support like I have at this time. And I felt real bad. Like, what are we supposed to do?"

He also got his celebrity friends to appear in a public service announcement to encourage people to register.

Nelly says he wants people to know about the bone marrow registry and sign up for it.

The rapper believes a donor will be found for Donahue.

"I have to dwell on the positive and keep moving," he says. "And to keep [Donahue] positive about the situation. When you think positive, positive things happen. That's just been the whole philosophy of my life ... And this is no different. So I'm sure we're going to find one."

Donahue shares her brother's faith that a marrow donor match will be found, and she says Nelly's support has made a world of difference.

"You know you'll always have that brotherly love, that brother support, that sister support," she says. "But when something like this happen, that really let me know that no matter what happens, I always have his support — regardless what it is. So I wasn't surprised and I wasn't shocked. But that's the type of person that he is."

So, after all Nelly's success, his hits and his Grammy, he says he won't be completely happy until his sister is well again.

Nelly says he hasn't done enough because his family hasn't found a donor for his sister.

"I just feel like this is what any brother would do for their sister," he says. "That's what family does. So you try to stick by that."