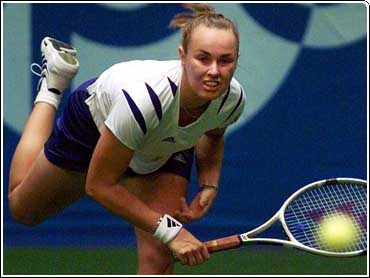 Martina Hingis, the defending champion and No. 1 seed, pounded out a 6-3, 7-5 victory in 74 minutes over No. 6 Sandrine Testud on Sunday for her third title at the Pan Pacific Open.

"This title means a lot to me because it is my first of this new millennium," Hingis said.

Steffi Graf and Gabriela Sabatini are the only three-time winners of the tournament.

After collecting $166,000 from the purse of $1.08 million, Hingis partnered with Mary Pierce of France to win the doubles title, 6-4, 6-1 over Alexandra Fusai and Nathalie Tauziat of France. For the victory, Hingis and Pierce each got $25,500.

In the singles, "players who (want to) beat Martina have to be powerful ..." Testud said.

Otherwise, Testud said, the Swiss teen-ager's opponents will have to play a perfect game.

"I tried to be aggressive, make her run as much as possible, and serve and return well," Testud said. "But today (Hingis) was too good and she served good. I didn't serve as well as I was expecting."

Testud, reaching the final of a first tier tournament for the first time, was shaky in the opening set and was broken at love in the sixth game.

In the second set, Testud broke twice but was broken three times. Hingis converted four of eight break points, to two of four for Testud.

Testud, who was ranked 15th, will move up to No. 10, her highest ranking ever.

"My serves were going everywhere (in the second set)," Hingis said. "I have never missed by that far. At 5-5, I was very happy to break her right back and go up 6-5."

Hingis, noted for her singles play, also has excelled in doubles. She is one of only two women to win a Grand Slam in doubles.

In 1998, she paired with Mirjana Lucic to claim the Australia Open women's title and partnered with Jana Novotna to win the French Open, Wimbledon and the U.S. Open.

She was the first woman to win all four women's doubles Grand Slam events since Martina Navratilova partnered with Pam Shriver in 1984.

In 1999, Hingis won six doubles events, including the Australian Open, the Chase Championships and the Italian Open, pairing with Anna Kournikova.