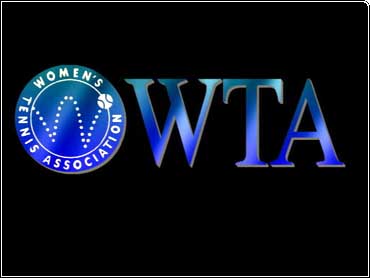 The splash of a singles final between No. 1 Martina Hingis and No. 2 Lindsay Davenport vanished in a thousand puddles when the State Farm Women's Tennis Classic was canceled because of rain.

The decision was made Monday after the eagerly awaited rematch of this year's Australian Open final was rescheduled three times. It initially was scheduled for Sunday afternoon.

The rainout is the first for a WTA Tour event since the 1998 DFS Classic in Birmingham, England, a grass-court warmup for Wimbledon that was canceled after the quarterfinals.

Peter Tatum, the director of the WTA event and this week's Franklin Templeton Tennis Classic, also canceled a doubles semifinal between the second-seeded team of Davenport and Anna Kournikova and No. 3 Hingis and Mary Pierce and the doubles final.

All first-day matches of the men's event were rescheduled.

But Tatum felt the delay would not affect the Templeton, which features 10 of the top 20 players on the ATP's entry system, because the major storm system that soaked the desert was expected to move east by Tuesday.

"Luckily we're early enough in the week and we've got enough courts that we'll make up for it," he said. "We're going to be playing on four courts at nine o'clock tomorrow morning, so we'll get our last qualifying matches in and get the men's draw under way."

Neither Hingis nor Davenport had played in a tournament where a round was canceled.

"It's kind of mind-boggling, because it's so rare," said Davenport, who pulled her left hamstring while beating Hingis in the Australian Open final in late January and hadn't played since.

"I had such a tough draw (Jennifer Capriati, Monica Seles and Kournikova), and I came though it, and I was playing better," she went on. "I feel good. I played good matches after a month off. I'm going home and take a couple of days off. The conditions at Indian Wells are very similar, so if my game stays good, maybe I'll have another opportunity to play Martina."

Davenport has beaten Hingis in their last four meetings and owns a 10-7 record against her, but hasn't been able to regain the No. 1 spot she held for 22 weeks before Hingis took over on Aug. 9.

But Hingis battled from 4-1 down in the second set against Davenport in Melbourne before losing, 7-5, and was lookin forward to another chance.

"I've lost the last four times, but I started a little change in Australia to be able to turn around the match," the Swiss star said. "You always have to be positive when you play her, and it's disappointing, because I felt good yesterday, and I was really pumped up to play that final."

The two received $43,500 each in finalist money and $4,200 apiece as doubles semifinalists. They also earned equal points, allowing Hingis to remain 273 points ahead of Davenport in this week's singles rankings.

Cara Black of Zimbabwe and Kazakhstan's Irina Selyutina earned $6,900 each.