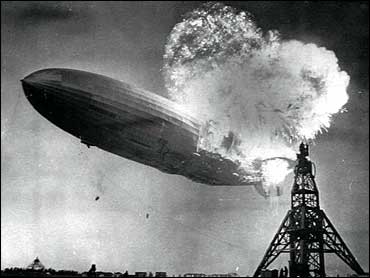 At 87, Robert Buchanan says he sometimes has trouble remembering what he did 10 minutes ago. But he can recall in vivid detail the day 70 years ago, when he watched the luxurious airship Hindenburg erupt into a fireball.

Flames roared across the surface of the mighty German dirigible only 100 or so feet above him, singeing his hair as he ran for his life.

"It was a piff-puff, just like someone would leave the gas on and not get the flame to it," said Buchanan, one of the last living members of the ground crew waiting to help the Hindenburg land.

Seventy years ago Sunday, the hydrogen-filled Hindenburg ignited while easing toward its mooring mast at the U.S. Navy base in Lakehurst. The blaze killed 35 people on board and one person in the ground crew; 62 passengers and crew members survived.

"I ran quite a distance because the heat, the flame, kept shooting out ahead of me," said Buchanan, of nearby Tuckerton. "And I really didn't think I was going to make it, frankly."

The huge airship — more than three times longer than a Boeing 747 — was engulfed in flames and sank to the ground in less than a minute. Photographers and newsreel crews on hand for the landing captured the scene, and a shocked radio station broadcaster recorded the often-replayed phrase "Oh, the humanity and all the passengers!"

The 804-foot-long Hindenburg was cutting-edge technology, with its fabric-covered, metal frame held aloft by more than 7 million cubic feet of lighter-than-air hydrogen. Flammable hydrogen had to be used because of a U.S. embargo on nonflammable helium.

It was "the Concorde of its day back in 1936 and '37," said Carl Jablonski, president of the Navy Lakehurst Historical Society. But after the fire, he said, it would be called the "Titanic of the sky."

The historical society planned a private 70th anniversary memorial service Sunday at the crash site in Lakehurst, about 40 miles east of Philadelphia.

The Hindenburg was a swastika-emblazoned billboard for Nazi Germany, providing travel across the Atlantic in less than half the time of the standard four- to five-day ocean liner trip, said Rick Zitarosa, a vice president of the historical society. It carried more than 1,000 passengers on 10 successful round trips between Germany and Lakehurst in 1936, in addition to trips to Brazil the same year.

"It was the most luxurious experience in the air, before and since," Zitarosa said.

On May 6, 1937, more than 1,000 sightseers had gathered at Lakehurst to see the Hindenburg arrive with 61 crew and 36 passengers after its first trans-Atlantic flight of the year.

Buchanan, 17 at the time, was among more than 200 ground crew members waiting in rainy weather.

"The blessing is that I wore a sweater and I was soaking wet, absolutely wringing wet. And that's what I think saved us," Buchanan said.

"He was just going to make a nice picture of a dirigible coming in. And then it blew, right when he had his finger on the shutter," recalled Marty Lederhandler, 89, an AP photographer of 66 years who was working in the news service's New York darkroom when the Hindenburg crashed.

"Just instantly, the whole place was on fire," said Doehner, of Parachute, Colo., the last surviving passenger. "My mother threw me out the window. She threw my brother out. Then she threw me, but I hit something and bounced back. She caught me and threw me the second time out. My sister was just too heavy for her. My mother jumped out and fractured her pelvis. Regardless of that, she managed to walk."

Doehner, 78, still has trouble discussing the tragedy that killed his father and sister. He was hospitalized for months for treatment of burns.

"You either died a horrible death, or you got out with minor injuries. There weren't many cases that were in between," Zitarosa said.

The cause of the disaster is still debated. The most accepted theory is that static electricity from the day's storms ignited leaking hydrogen.

On the base in Lakehurst, a plaque and marker in the middle of an old airship landing area show where the Hindenburg met its end.

In the distance, the massive Hangar No. 1, built by the Navy in 1921 to house airships, houses an information center, which the Navy Lakehurst Historical Society runs in partnership with the military. Exhibits include old newspaper clippings, a metal girder from the Hindenburg, and dinnerware blackened by the fire.

Buchanan doesn't need the exhibits to jog his memory.

"A thing like that, you pretty much, in detail, you remember everything," he said.