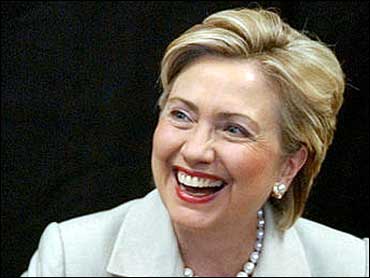 Sen. Hillary Rodham Clinton's former finance director has been indicted on charges of filing fictitious reports that misstated contributions for a Hollywood fund-raising gala for the senator, the Justice Department said Friday.

The indictment, rare for a political campaign, was unsealed in Los Angeles charging David Rosen with four counts of filing false reports with the Federal Election Commission. The charges focus on an Aug. 12, 2000, dinner and concert supported by more than $1.1 million in "in-kind contributions" — goods and services provided for free or below cost. The event was estimated to cost more than $1.2 million.

The FBI previously said in court papers that it had evidence the former first lady's campaign deliberately understated its fund-raising costs so it would have more money to spend on her campaign.

While the event allegedly cost more than $1.2 million, the indictment said, Rosen reported contributions of about $400,000, knowing the figure to be false.

The indictment charged that he provided some documents to an FEC compliance officer but withheld the true costs of the event and provided false documents to substantiate the lower figure.

In one instance, Rosen obtained and delivered a fraudulent invoice stating the cost of a concert associated with the gala was $200,000 when he know that figure was false, according to the indictment. The actual cost of the concert was more than $600,000.

Each of the four counts of making a false statement carries a maximum penalty of up to five years in prison and up to $250,000 in fines upon conviction.

Rosen's attorney, Paul Mark Sandler, did not return a call asking for comment. Mrs. Clinton's lawyer on campaign finance matters, David Kendall, said, "The Senate Campaign Committee has fully cooperated with the investigation. Mr. Rosen worked hard for the campaign, and we trust that when all the facts are in, he will be cleared."

The businessman who hosted the event, Peter Paul, has told federal authorities that it cost more than $1 million and that he had been surprised when he saw that most of the contributions were not reported.

The money from the fund-raiser went to Mrs. Clinton's successful campaign for a Senate seat from New York, the Democrats' national Senate campaign organization and a state Democratic Party committee.

The joint fund raising made the rules more complicated because the gala raised both "hard money" — funds given to candidates subject to federal limits — and "soft money" that was unregulated and unlimited under the former campaign finance law.

Underreporting the cost of the event allowed the committee to spend less of the coveted hard money, contributions that unlike soft money could be used to cover Clinton's campaigning costs.

Federal law governing such joint fund-raisers was designed to prevent joint committees from circumventing restrictions on the contributions given directly to candidates.

Most allegations of campaign finance irregularities are handled administratively through the FEC, although the Justice Department has investigated such matters in the past.

In addition to his Clinton effort, Rosen has raised money for several other high-profile Democratic candidates, including former presidential hopeful Wesley Clark. Most recently, he was named to the fund-raising team of Donnie Fowler, a candidate for the Democratic National Committee chairmanship.

"I'm sorry that that happened to David, but I don't think it's going to stop or slow down the campaign for chair," Fowler said in a telephone interview Friday.