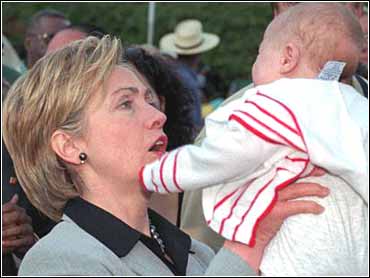 Senate candidate Hillary Rodham said Wednesday she was done talking about allegations that she used an obscenity-laced, anti-Semitic slur 26 years ago during a heated discussion with a campaign aide to her husband.

"I've said all I'm going to say about this. It wasn't true, it didn't happen and I'm not going to allow it to distract from the real issues of this campaign," the first lady told a news conference in Albany where she picked up the endorsement of the 2.5 million-member state AFL-CIO.

While Clinton and her campaign did their best to get the story behind them staging the news conference, unveiling a new television advertisement and making public her latest financial filing to the Federal Election Commission - reporters continued to question her about it.

And, a memo surfaced in which one of the first lady's campaign aides asked Jewish supporters to call two reporters working on the story for Jewish newspapers and express their outrage "as concerned citizens."

"It is important that you do not say that you (are) calling because the campaign asked you to, but because you are outraged with what was said about her," said the memo to the campaign's "Jewish Advisory Group." It came from Karen Adler, an adviser to the first lady on Jewish affairs.

"We had received a lot of calls from people who wanted to help," Clinton campaign spokesman Howard Wolfson said when asked why Adler had sent the memo. He wouldn't comment on why the memo had asked potential callers to hide the campaign's encouragement to them.

Clinton, while attending a fund-raiser for Mayor Anthony Masiello at the Buffalo Zoo Wednesday evening, said she did not know about the memo.

"I've been on the road," she said after spending nearly an hour making her way through a hundreds-strong reception line that snaked through the park.

When told of the memo's contents, the first lady replied, "A lot of my friends have been calling people literally from all over the country and the world ... Lots of people have been calling all kinds of supporters and others to say that they know that, not only is it not true, but we need to keep focused on the issues and what will really matter in the lives of New Yorkers."

Wolfson said the advisory group was made up of "leaders and supporters in the Jewish community," but he wouldn't provide a list of names of who the memo went to. Adler wasn't taking calls from the news media.

Dan McLagan, a spokesman for Clinton's Republican Senate rival, Rep. Rick Lazio, said, "It's outrageous that Mrs. Clinton's campaign would ask her supporters to lie for her."

One of the reporters mentioned in the memo, Adam Dickter of the Jewish Week newspaper, said he did become "somewhat suspicious" because of the "large number of calls from people who wanted to be heard about the subject."

"It's impossible for e to know which of the calls were in response to that memo and which were calls that would have come ordinarily, but there was a large number of calls and some of them came in close succession from people who I do not ordinarily hear from," Dickter said.

The other reporter, Rachel Donadio of The Forward, said she had received two unsolicited calls. "You don't usually get people calling you up out of the blue, saying `I hear you're working on this story,"' she said.

On Wednesday morning, Paul Fray, interviewed by ABC's Good Morning America, stuck by his claim that an angry Hillary Rodham had called him a "Jew b------" in 1974 on the night her future husband lost a congressional race in Arkansas. Fray was Clinton's campaign manager at the time.

In the ABC interview, Fray offered to take a lie detector test and truth serum to back up his claim.

"He can do whatever he wants to do. I have nothing to say about it," the first lady said later Wednesday.

Fray's claim came to light with the publication this week of State of A Union: Inside the Complex Marriage of Bill and Hillary Clinton, a book by Jerry Oppenheimer. In the room at the time of the argument were Fray, his wife, Bill Clinton and his future wife.

President Clinton, in a call Sunday to the managing editor of the New York Daily News, said that while his wife might have been guilty of swearing at Fray, she did not utter any anti-Semitic slur. The first lady, appearing on the verge of tears, had told a news conference earlier in the day that she had not uttered such a slur.

As Fray continued to stick by his claim, others chimed in on behalf of Hillary Clinton.

"All these stories about her anti-Semitism are wrong," Nobel Prize winner and Holocaust survivor Elie Wiesel told the Daily News while revealing that the first lady had earlier donated a portion of the earnings from her 1996 It Takes a Village book to the Elie Wiesel Foundation for Sanity.

"On Avenue J in Flatbush, where Jewish voters are making their decisions about which candidates they're comfortable with and want to be in the United States Senate, it doesn't amount to bupkus," said Rep. Anthony Weiner.

For her part, Clinton said she would be attending services at an Orthodox synagogue on Long Island on Saturday, but wasn't certain yet whether she would use tht appearance to talk more about the issue.

Rabbi Marc Schneier of the Hampton Synagogue in Westhampton Beach said the first lady's visit was in the works for several weeks before the controversy erupted.

"She's a great friend of the Jewish community but I would say above all I know her as a woman of integrity and honesty and great intelligence and there's no reason to second-guess her now," Schneier, who heads the North American Boards of Rabbis, which includes rabbis from all branches of Judaism, said.