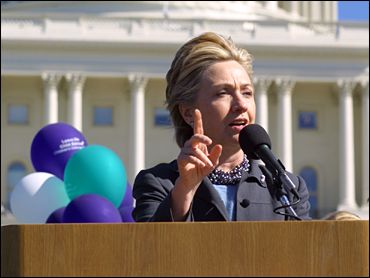 Sen. Hillary Rodham Clinton said Wednesday she has no interest in being a Democratic cabinet member, isn't ready to say if she will run for re-election, and hedged a bit when asked about running for vice president next year.

Asked what she would say if former Vermont Gov. Howard Dean asked her to be his running mate, the former first lady said: "I'm not going to speculate or look into the future. I want to be the best senator I can be."

Clinton did say any of the Democratic candidates could beat President Bush.

While New York's junior senator has brushed aside suggestions that she might run for vice president — or president — in 2004, former Gen. Wesley Clark said earlier this week he would keep her in mind as a potential running mate.

Dean and Clark are among nine Democrats seeking the party's presidential nomination. Dean is considered the front-runner for the nomination.

"As a party, we're blessed with a lot of qualified people like Senator Clinton," said Dean spokesman Eric Schmeltzer. "But not one vote has been cast yet so it's way too premature to even begin thinking of the VP slot, as much as the media would love to start playing that game."

On Sunday, Clinton dismissed suggestions that she might be asked to become the Democrats' vice presidential nominee.

In turning aside questions about whether she would run for president next year, Clinton has repeatedly said she plans to serve out her full Senate term that ends in 2006. She has not ruled out running for president in 2008.

While Clinton has set up a campaign committee to raise funds for a 2006 re-election race, she has yet to say she will definitely run for a second Senate term. She refused to take that step on Wednesday.

"I'm not thinking that far down the road," she said during a stop in Troy, just north of Albany, to promote micro-business development.

Clinton said she was thinking about the 2004 presidential race, however, and would work hard to elect a Democrat. She said specifically that Dean could beat Bush, a view not shared by some other Democrats.

"Sure. Absolutely," she told reporters. "Any of our candidates can (beat Bush). Whoever emerges from this nominating process will be a competitive candidate. This country is very divided."

"We can put together a winning combination to take back the White House and that's what I'm going to work on," she added.

"I worry about four years of a second term of the Bush administration with no accountability — no election waiting at the end," Clinton said, adding that "extreme legislation (is) waiting in the wings if the president gets re-elected. There will be a move to turn the courts into an adjunct of the Republican Party and their extreme ideology and agenda."

Clinton was asked if she had any interest in serving in a Democratic administration, perhaps as secretary of state.

"No. I am happy being the senator from New York," she said.