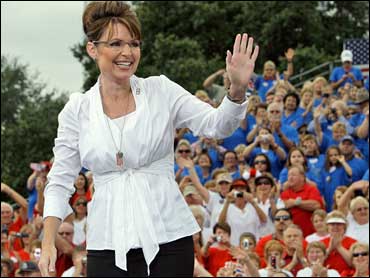 CBS News has confirmed that the Republican National Committee spent up to $150,000 on what appears to be wardrobe and makeup spending at high end department stores for the GOP Vice Presidential nominee Sarah Palin.

But one of the most famous political fashion designers of the year, Susanna Chung Forest, who designed Hillary Clinton's pantsuits says it would be unusual for a candidate as famous as Sarah Palin to need to buy clothes.

"Why do you need to pay for it?" Forest told CBS News from her boutique Susanna Beverly Hills saying that most designers would offer to clothe a candidate for free. "It's an honor, you are going to design for someone who could be the president of the United States," noting that the exposure any designer would get from dressing someone as famous as Clinton or Palin would be worth much more.

The Los Angeles Times reported earlier this year that Senator Clinton's custom made pantsuits from Forest were worth about $6,350 a piece retail. Clinton's spokespeople did not respond to requests for comment.

The McCain campaign responded to the Palin wardrobe spending with the following statement, "With all of the important issues facing the country right now, it's remarkable that we are spending time talking about pantsuits and blouses. It was always the intent that the clothing go to a charitable purpose after the campaign," said spokesperson Tracey Schmitt.

Spending over a hundred thousand dollars on a wardrobe is a sharp bump since her days as governor. Matt Simon, reporter from the CBS News Anchorage affiliate says he jokingly asked the governor 'who she was wearing' for the inaugural ball and she responded that she didn't know. During an interview with KTVA soon after she was elected Palin told the station that her kids were bugging her to get some new clothes.

FEC officials say campaigns are allowed to spend on personal use items but it must be an item that "would exist irrespective if they were not a candidate or office holder", i.e. clothing, mortgage payments, country club fees, etc.

However, the political party (such as the Republican National Committee) can make coordinated expenditures with the candidate's campaign of up to $19.2 million dollars. The FEC says the possible outstanding question is: Are coordinated expenditures the same as if it were the campaign? The FEC tells CBS News that to determine this someone would have to file a complaint and then the FEC would investigate.

The Obama campaign says it has paid for hair and makeup costs for the Obamas and the Bidens associated with interviews or events but campaign officials say neither the campaign nor the Democratic National Committee(DNC) has paid for clothing.

A CBS News review of DNC and Obama campaign expenditures did not find any similar purchases.
By Laura Strickler