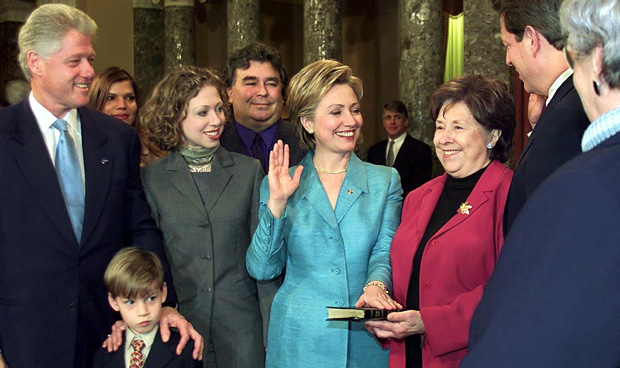 LITTLE ROCK, Ark. It's not quite "Project Pantsuit," but it's not far off.

Hillary Rodham Clinton on Monday honored fashion designer Oscar de la Renta, the man responsible for a teal, silk pantsuit she wore when she was sworn in as a senator.

The two shared the stage together last month in New York when Clinton, a self-professed pantsuit aficionado, presented de la Renta with the Council of Fashion Designers of America's highest honor and joked about a fictional "Project Runway" spinoff, "Project Pantsuit."

They met again Monday evening in Little Rock, where some of de la Renta's work — including the teal pantsuit — is on display at the William J. Clinton Presidential Center.

Clinton and her husband, former President Bill Clinton, thanked de la Renta for his work and his friendship as they feted him and his temporary exhibit called "Oscar de la Renta: American Icon," which opened in May and runs through Dec. 1.

"I was not asked to open this relatively brief ceremony because I am the most expert person on this stage in the field of high fashion," the former president said in the company of de la Renta and Vogue Editor-in-Chief Anna Wintour.

Wintour, meanwhile, praised de la Renta and his work with first ladies and Clinton for her work over the years, most recently as secretary of state.

"She always looked entirely appropriate wherever she was and nearly always in Oscar," Wintour said.

Wintour drew applause from the crowd when she mentioned the former first lady as a potential presidential candidate in 2016.

"It's anyone's guess what the next chapter will be for this extraordinary woman," Wintour said. "I can only hope that all of you here in Little Rock will be celebrating her come November 2016."

Clinton didn't discuss her future or poke fun at her penchant for pantsuits on Monday.

Instead, she thanked de la Renta, whom she has called a "dear friend."

"Oscar has really treated first ladies such as myself and Nancy Reagan and Laura Bush with such great support," she said. "And sometimes, as Chelsea knows, he's even dressed our daughters."

That was evidenced at the de la Renta exhibit, where Clinton's daughter's garb was displayed near her teal pantsuit.

That pantsuit, which hardly needs a placard identifying who wore it, stands near a red, cashmere outfit Laura Bush wore in 2008 and a beige ensemble Nancy Reagan donned a decade earlier.

Visitors also see reproductions of a couple of de la Renta dresses Clinton has worn over the years, but the pantsuit stands out.

The signage surrounding her pantsuit, much like her new Twitter biography, plays on the prominent pantsuits she's worn.

Clinton calls herself a "pantsuit aficionado" on Twitter. However, the wording on a placard at the exhibit — much like the exhibit itself — is a bit more highbrow.

Across the exhibit, flowers bloom from a handful of the designer's evening gowns. Another array of dresses pay homage to the Dominican-born designer's time in Spain. A mannequin wearing a black-and-white polka dot mermaid dress pauses as if frozen while dancing flamenco, her arms snaking through the air.

"What I saw in Spain colored the way I have looked at clothes ever since," de la Renta says in a quote displayed on the wall.

The former first ladies' outfits don't look quite like they walked off the streets of Seville, but they're still clearly de la Renta — a designer who has built relationships with a number of women in the White House.

"Oscar has been a dear friend to me, and many other first ladies. His designs are truly beautiful and exemplify American style," Laura Bush said in a quote near the red suit she wore five years ago for the White House Holiday Press Preview.

Even the former president lamented the fact that he's never worn one of de la Renta's dresses.