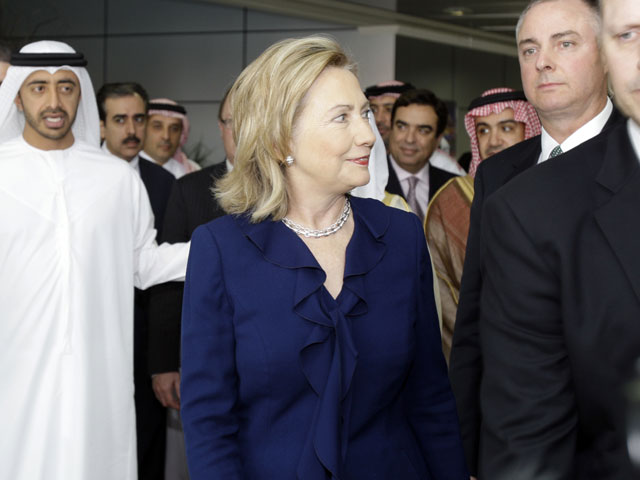 In a town hall meeting in Abu Dhabi on Monday, Secretary of State Hillary Clinton decried the man who shot Arizona Rep. Gabrielle Giffords as an "extremist" - and urged the audience not to judge his actions as representative of American ideologies.

When asked by a student why many in the United States target the entire Arab world in reference to the 9/11 terrorist attacks, Clinton condemned "extremists and their voices," and said both countries had to work to overcome the strong influence of those voices, according to the Associated Press.

"We have extremists in my country. A wonderful, incredibly brave young woman Congress member, Congresswoman Gifford[s], was just shot by an extremist in our country," Clinton said.

"The extremists and their voices, the crazy voices that sometimes get on the TV, that's not who we are, that's not who you are, and what we have to do is get through that and make it clear that that doesn't represent either American or Arab ideas or opinions," Clinton continued.

In the aftermath of the Saturday shootings in Tucson, Arizona - in which six people (including a nine-year-old girl) were killed and 14 injured - many have questioned the possible role of inflammatory rhetoric in inciting political violence.

Jared Loughner, the 22-year-old man who is accused of opening fire outside of an Arizona supermarket, has been charged with one count of attempted assassination of a member of Congress, two counts of killing an employee of the federal government and two counts of attempting to kill a federal employee. Two of the charges carry a possible death penalty sentence.

Clinton, who will continue on to Oman and Qatar later in the week, said she hopes her trip can build understanding between the United States and the Arab world.

"We have the same kinds of problems. So rather than standing off from each other, we should work to try to prevent the extremists anywhere from being able to commit violence."