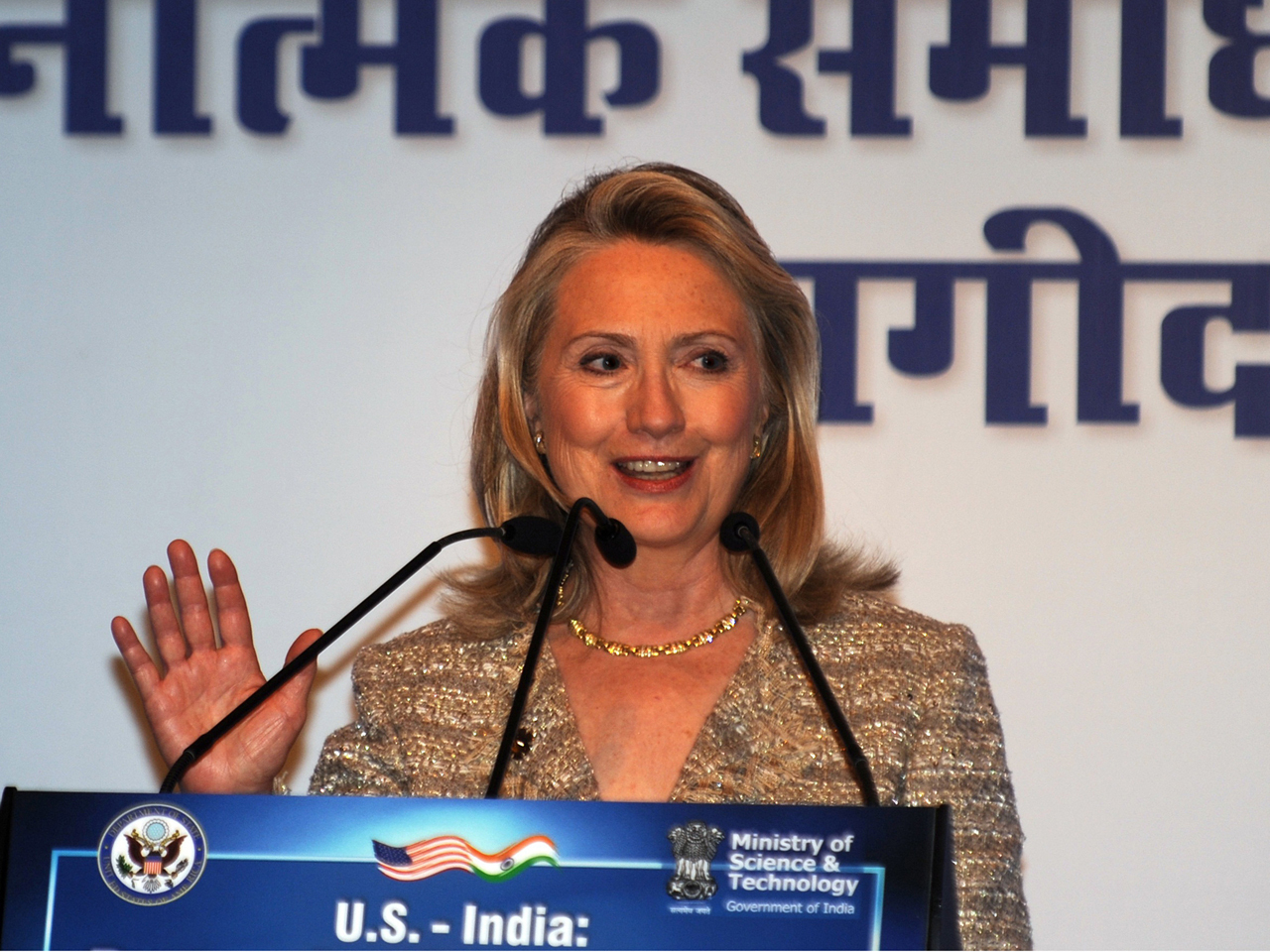 (CBS News) It's hard to remember quite how controversial it was when Democratic presidential candidate and Arkansas Gov. Bill Clinton suggested 20 years ago that if he was elected, voters would get "two for the price of one" in the White House.

The notion that Hillary Clinton - then a 44-year-old attorney who sarcastically snapped during the campaign that perhaps she should have "stayed home and baked cookies and had teas" when pressed about a possible conflict of interest involving Clinton's law practice and her husband's position as governor - would be a presidential equal prompted concern among Democrats that Americans weren't ready for a first lady with a hand in serious policy.

Republican consultant Roger Stone, describing Clinton as "grating, abrasive and boastful," told New York Times columnist Maureen Dowd at the time that "[t]here's a certain familiar order of things, and the notion of a coequal couple in the White House is a little offensive to men and women."

What a difference two decades makes. Hillary Clinton - whose approval rating bottomed out at 43 percent in Gallup polling after her failed attempt to reform health care during her husband's first term - is now among the most beloved politicians in the country, with polls showing that roughly two in three Americans view her favorably. Clinton is now seen as the leading contender to be the Democratic presidential nominee in 2016, though she insists she is not interested in the job.

"We, the American people, have lived with Hillary Clinton now for a very long time," says Stephen Hess of the Brookings Institution, who was a White House staffer under Presidents Eisenhower and Nixon and an adviser to Presidents Ford and Carter. "We've watched her change, grow, change her hairdo and everything else. She has become in some ways a part of our time."

Clinton's time as a public figure has come during a transitional period in which female politicians have achieved greater acceptance - and power - in American society. If, as Clinton herself predicts, America will soon elect a female president, she will be credited with helping to pave the way even if she never takes the oath of office.

After her failure with health care reform, Clinton saw her public role diminish within her husband's administration; her most high-profile moment for the rest of his two terms came in 1998, when she publicly defended her husband after his affair with White House intern Monica Lewinsky. (At the time, you may recall, she derided the accusations as being part of a "vast right-wing conspiracy.") Her approval rating ticked up during this period - hitting 67 percent in 1999 - ahead of her 2000 Senate run.

Clinton won the Senate seat but lost support as she did so, with her approval rating dropping back down below 50 percent. Her behavior in the Senate, however, won her plaudits even from Republican lawmakers, who professed admiration (and surprise) that she was following the chamber's traditions and largely deferring to longer-serving members.

Still, after easily winning a second term in 2006, Clinton entered the 2008 presidential race as a divisive figure, and it was not until she lost the Democratic nomination to Barack Obama that her favorable rating started rising to where it stands today. That rating has stayed above 60 percent since 2009, as Americans have overwhelmingly stated approval of Clinton's performance as Secretary of State.

"Because she's not running for office and she's not an active part of Obama's re-election campaign, because she can't be, she has virtually complete control of the image the public has of her," says Jennifer Lawless, director of the Women & Politics Institute at American University.

Lawless says Clinton has reflected nearly "every single aspect of people's attitudes toward female politicians" during her two decades as a public figure, arguing that what was once perceived as a liability is now a strength.

"I don't think that anybody would question if she would, as George W. Bush would say, look the terrorists in the eye," she said. "A woman who was perceived as threatening was transformed into being able to legislate on all fronts and represent the administration beautifully."

Hess, of the Brookings Institution, says that one simple explanation for Clinton's current popularity is her performance as an "indefatigable" Secretary of State. "We're doing pretty well under her tutelage in foreign relations at a time when Americans are not very happy with things domestically," he says.

Hess also sees a strain running through Clinton's career - as a first lady standing by her husband, a presidential candidate who joined her bitterest rival and the world's top diplomat - that strikes a chord with Americans.

"There's something that we like about her loyalty," he says.

A woman who told "60 Minutes" in 1992 that she isn't "some little woman standing by my man like Tammy Wynette" in response to questions about her husband's alleged infidelity is also widely perceived, correctly or not, as having lost some of the rough edges she had when she burst onto the national scene. (She later clarified that she was referring to Wynette's song, "Stand By Your Man," rather than the singer's behavior, with that comment.) The Hillary Clinton that now exists in the public imagination is perhaps now best reflected the popular "Texts From Hillary" site, which presents Clinton as all business but also human - a wry and knowing veteran of two decades of political combat.

That perception will undeniably change if Clinton decides to run for president in 2016 and has to reenter the political fray. But for now, Clinton seems to have earned a place in the cultural firmament as the ultimate survivor, someone who endured public adversity and emerged battered but resilient on the other side.