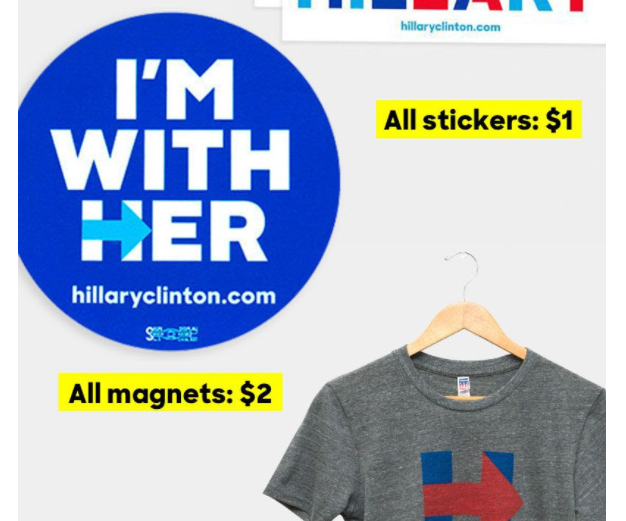 Hillary Clinton may have just lost the White House, but It’s never been more cost-effective to be #WithHer.

The presidential runner-up sent an email blast to supporters on Wednesday offering “deeply discounted” merchandise, ranging from $15 logo t-shirts to $2 “Deal us in” buttons.

The campaign hoped to tap into Republican party opposition, asking supporters: “Still fired up? Time to take the fight to Trump. Get deeply discounted items from the shop and help support Democrats.”

While it may seem like a clearance sale of sorts, quantities still seem to be limited. A week ago -- two days after Clinton’s election loss -- a Hillary for America official told TMZ that they were inundated with orders as collectors rushed to own a piece of the historical campaign.

And the reactions on Twitter echoed this, as supporters expressed their grief at Clinton’s fallen campaign:

President-elect Donald Trump’s campaign took a different approach in their post-election email, boasting that their merch is in short supply.

With only 5,125 “MAGA” hats and 475 #BigLeague t-shirts left, Trump supporters should act now if they want to have the right garb come January’s inauguration.