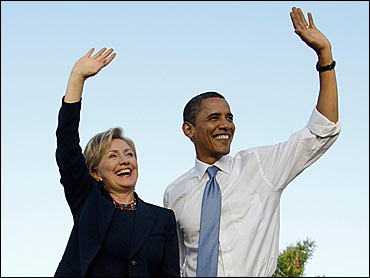 Obama's announcements include members of his national security team and beyond, completing the nominations for one-third of his Cabinet as he moves quickly to assemble the country's new leadership in times of war and a troubled economy.

His selections include some of his most loyal campaign advisers and notably some who were not, including Democratic primary rival Clinton and Republican President George W. Bush's defense secretary, Robert Gates, who is to stay in his current post.

The Democratic official disclosed the plans on a condition of anonymity Sunday because they were not authorized for public release ahead of the news conference.

Those names had been discussed before for those jobs, but Obama was going to make them official Monday in his hometown.

Last week, he named key members of his economic team, including Timothy Geithner, president of Federal Reserve Bank of New York, as treasury secretary. Obama is not yet ready to name his intelligence advisers, one Democratic official said.

Clinton's nomination is the latest chapter in what began as a bitter rivalry for the Democratic presidential nomination. After Obama defeated her, Clinton backed his general election campaign against Republican Sen. John McCain, and she now has agreed to give up her Senate seat to be his top diplomat.