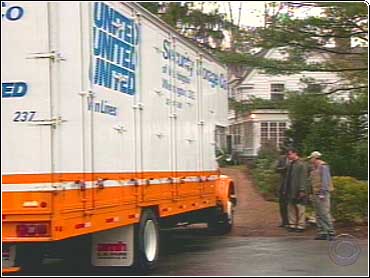 In a show of political and martial solidarity, Bill and Hillary Clinton arrived here in Chappaqua ready to spend their first night amid the movers the mess, and the media spotlight.

But while she is staying, he is just visiting. The Clintons' commuter marriage has officially begun, reports CBS News Correspondent Diana Olick.

They rode into a quiet suburban cul de sac with a Secret Service motorcade but acting just like any husband and wife about to tackle the tiring job of unpacking and arranging.

"Oh, it's just so exciting!" a neighbor exclaimed.

Their big orange truck had already arrived, minus the Clintons but full of the anticipation of round one in the New York Senate race. On Wednesday, Mrs. Clinton's likely GOP opponent, New York Mayor Rudy Giuliani, sent his greetings.

"We welcome all newcomers and recognize the fact that they are newcomers. Thank you," Giuliani said.

And so it begins. But so too begins a new era for the Clintons and the country and the definition of a first lady.

Although Mrs. Clinton is walking away from the White House, those who know her say she'll never be far away.

"She may not be there for the photograph on the North portico, for a state dinner in a ball gown, but she's there on the phone with her husband still talking policy," said first lady historian Carl Anthony.

The president will leave opn Thursday. On Wednesday night, the Clintons will unpack together and settle into the first home they've owned in years.

Earlier Wednesday, the president said he has been helping decide what to box up and what to leave behind.

"It's been a rather interesting challenge over the holidays, but I've enjoyed it very much," Mr. Clinton said.

The Clintons bought the home to establish a New York residence so the first lady can run for Senate. Spokesman Joe Lockhart reiterated that when the president's term is over, he intends to make Chappaqua his home.

This is the first time in history that a first lady will leave the White House to pursue her own career, but this first couple seems to feel at home with that. Mrs. Clinton already said she would scale back her duties as first lady.

The president will keep the White House as his primary residence.