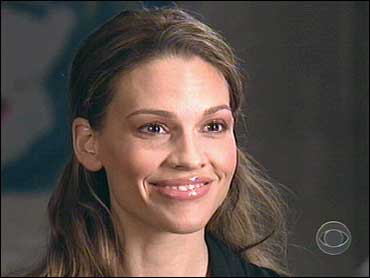 Hilary Swank, a high school dropout who grew up in a trailer park, has won yet again -- two Oscars now, at the age of 30.

Director Mike Nichols told Correspondent Mike Wallace that after he saw her profile on 60 Minutes earlier this year, he knew she was a shoo-in for the best actress Oscar.

During her acceptance speech, Swank said: "I don't know what I did in this life to deserve this. I'm just a girl from a trailer park who had a dream."

And that dream has taken her on quite a ride.

Swank lives in New York City, and she's a movie star who rides the subway.

"I use the subway all the time. It's my form of transportation," says Swank. "Because it's quick. It's inexpensive."

And she says it's a great way for her to study her craft.

"My job is about playing people. And I think once you lose touch with people, what do you play," she says. "So I'm here, and it's the best people watching in the world. You know?"

Last year, Swank rode the subway to Brooklyn, six days a week, for three long months. Her destination was Gleason's Gym, where for more than 65 years now, thousands of boxers from Jake LaMotta to Muhammad Ali have trained. Swank went there to prepare for her role in "Million Dollar Baby."

Acting opposite Morgan Freeman and Clint Eastwood, Swank plays Maggie Fitzgerald, a 30-something, down-on-her-luck waitress who dreams of becoming a professional boxer.

It's a demanding part, physically and emotionally. Eastwood, who also directed the film, says he knew Swank had the acting chops for the part. But her physique was a different story.

"I just thought, 'Yeah, this gal would be great. If we can get her trained up. If we can get a little bit more bulk on her, to make her look like a fighter,'" recalls Eastwood. "She was like a feather. But what happened is, she had this great work ethic."

"I could do half a pull-up when I first started training," says Swank. "I literally, I tried to pull myself up, and I was shaking. And I couldn't do it. And I couldn't believe it. I thought, you know, and as a kid, you had, doing pull-ups and stuff. And then when I was done, I could do 11."

Swank bulked up by 19 pounds and learned to box like a pro. Everyone back at Gleason's was impressed. But she kept a secret from the boxers, and from the filmmakers who hired her.

She had a potentially life-threatening staphylococcus infection. "I got a blister the size of my palm on the ball of my foot," says Swank.

Within 48 hours, the blister was infected, and staph bacteria spread through her veins. "There were streaks going up my foot," recalls Swank. "So, I went to the doctor that second, and he looked at me, and he said, 'This is really serious. And if you had waited two more hours, you would have been in the hospital for three weeks. And if it gets to your heart, that's it.'"

She didn't tell Eastwood what had happened. "I didn't tell Clint, because in the end, that's what happens to boxers," says Swank. "They get blisters, they get infected. They have injuries and they keep pushing through it."

Her secret didn't surprise Eastwood one bit. He says her plain-and-simple determination to play the part is in large part why the film turned out so well. "This is just another step in her path to greatness," says Eastwood. "She's the best there is, as good an actress as I've worked with."

Like her character, Maggie Fitzgerald, Swank grew up in a trailer park in Bellingham, Wash. Much of her childhood time was split between performing in school plays and competitive swimming. By 15, she had settled on acting, not athletics.

"I ended up dropping out of high school. I'm a high school dropout, which I'm not proud to say," says Swank. "I had some teachers that I still think of fondly and were amazing to me. But I had other teachers who said, 'You know what? This dream of yours is a hobby. When are you going to give it up?' I had teachers who I could tell didn't want to be there. And I just couldn't get inspired by someone who didn't want to be there."

Her father was mostly gone. He was an Air National Guardsman and later a traveling salesman. Her mother was her main supporter. She thought Swank's acting talents were so exceptional that Hollywood was where her daughter needed to be. So the two of them moved there, even though they had little money to make the move – and no place to live when they got there.

She and her mother remain close to this day. "My mom said to me that I could do anything I wanted in life. As long as I worked hard enough," says Swank. "And to this day, it still makes me really emotional, because I just never questioned it, you know? She just always believed in me."

She was just 15 1/2 when they headed to Hollywood. "She was at a crossroads. My father and her were getting separated, and she said, 'Let's go to California,'" says Swank. "And so $75, and a Mobil card, we drove down to California."

They lived in the car for a couple of weeks. "We had a friend who was selling their house. And so they said, 'You know, there's no furniture, but you can stay there at night. And then, during the day, you have to leave so we can try and sell it,'" says Swank. "So we got air mattresses. Blew the air mattresses up. Slept on the air mattresses. And left in the morning."

They were not homeless for long. Within months, Swank started to land parts, but most of her work was typical teenage fare. By 23, she had landed a part on "Beverly Hills 90210," and it proved to be a turning point.

It was a blessing in disguise. Free from her contract on "90210," she was available to play the lead in a small film called "Boys Don't Cry." It was the true story of Tina Brandon, also known as Brandon Teena, a Nebraska-born girl with a sexual identity crisis: a girl who tried to live as a boy.
But when the secret got out, she was raped and murdered.

Swank's performance was haunting and powerful. And "Boys Don't Cry" earned her an Academy Award for Best Actress. It was a part for which she was paid just $75 a day -- $3,000 in total.

She won the Oscar, but it didn't take long after that to find out what respect or clout it gave her.

"So, I had an Academy Award, and I didn't have health insurance," says Swank, laughing. "The life of an actor."

Today, she and her husband, Emmy-winning actor and aspiring director Chad Lowe, live a quiet life in Manhattan. They share their townhouse with a menagerie of animals.

Swank is about as down-to-earth as a movie star can be. Right after her win last Sunday night, she shared the Oscar with movie fans on the street, and ended her evening with Oscar and a veggie burger.

Is she as uncomplicated a person as she seems to be?

"Yeah. I'm not a very complicated person. I don't feel like I need a lot of things to make me happy," says Swank. "I feel like – part of that is my upbringing, not needing a lot of things around you. It's the truth. It really is."