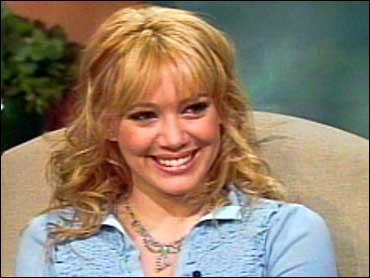 Hilary Duff is readily recognized by young daughters, if not their mothers. With more than 300,000 fan letters a week addressed to her Web site, she's one of Hollywood's rising stars.

Now, after 10 years in show business, her name appears alone above the title in her own film, "The Lizzie McGuire Movie." She dropped by Wednesday's Early Show to talk about it with co-anchor Hannah Storm, a fan herself.

Duff describes her character in the successful TV series, "Lizzie McGuire" as a totally normal girl. "I think that's why people relate to the show. She struggles through school, trying to fit in. She has embarrassing parents and an annoying little brother. And she just is kind of insecure and she's trying to find herself," Duff says.

In the movie, Lizzie McGuire is pretty much the same character, but "she finds herself a little bit," Duff says. McGuire and her friends pack their bags and take a class trip to Italy. Once there, McGuire is mistaken for pop singer Isabella.

Playing Isabella was a challenge for Duff; she says it was a departure from her role as McGuire. "Isabella is this very, very confident singer with big, crazy wild dark hair. So it was a big change for me. And also she had an accent. So it was a little hard for me to do," Duff says.

McGuire is soon transformed from a regular teenage girl to a pop star and she ends up performing onstage, something with which Duff is familiar. In 2002, Duff made her singing debut with the single "I Can't Wait" on the "Lizzie McGuire" soundtrack from Walt Disney Records.

Being in the limelight is not new for Duff. Earlier this year, she co-starred opposite Frankie Muniz in the popular kid-spy movie, "Agent Cody Banks." But Duff is quick to point out having a film riding on her name is quite another story.

"It's hard because 'Agent Cody Banks' is really like Frankie's movie. So he could be nervous for that one. And I'm getting pretty nervous," she says.

Though there seems to be no need for that. Many teen and pre-teen girls helped make "The Lizzie McGuire Movie" the second highest grossing film this past weekend, with a box-office take of $17 million. That's a number made even more impressive when one considers that its competition included "X2: X-Men United.

Duff also has a new line of clothing and cosmetics. And Vanity Fair dubbed her the "Tween Queen." A title Duff is comfortable with. She says, "It's very rewarding, I think. I've always looked up to my sister. And it's really cool that people might be looking up to me, too."

Duff's next movie projects will be "Cheaper by the Dozen" and "The Cinderella Story."

Born Sept. 28, 1987 in Houston, Texas, Duff has been performing for audiences since she danced with the Columbus Ballet Met touring company of "The Nutcracker" at the age of six. Soon after, she was acting in bit parts in television and film.