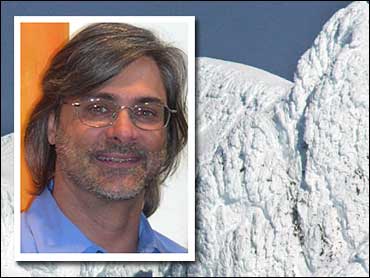 In an exclusive interview, Karen James, widow of Mount Hood hiker Kelly James, tells CBS Evening News Anchor Katie Couric that when her husband was found in a cave last Sunday, he had removed one of his gloves and extended his ring finger so that rescuers could identify him. She also says she is not angry with her late husband; instead, she feels lucky to have been with him for "the best journey" of her life.

"When the call came, we all just hugged each other and loved on each other," James tells Couric. "And we're so proud of him because we know he fought."

"He was laying on his side with his head on his pack [like I'd] seen a million times when he's been camping," adds James. "And he had taken off his right glove and he folded every finger back except the [finger with the] signature ring and put it out."

Asked by Couric if she was angry, James responded, "I don't know how you can be angry at someone who loved their family, who loved God … and gave back so much more than he took and gave me the best journey of my life."

Click here to read Katie Couric's interview with Karen James, and watch Friday's The Early Show for more of her story.

History and mountain experts, meanwhile, suggest it might be spring before the bodies of James' climbing partners, Brian Hall of Dallas and Jerry "Nikko" Cooke of New York City, are found. The search to recover them will continue, but only as time and resources permit.

With more snow on the way and risk to the searchers, some members of the Hall and Cooke families agreed that the search should end, the sheriff said.

"We wouldn't be doing this today if they hadn't been part of that decision," Hood County Sheriff Joe Wampler said at an airfield news conference. "These folks are all outdoorsmen, they know, but some are not ready to say no yet."A new snowstorm and a lack of resources influenced the decision, reports . Wampler decided the time had come to realize that Hall and Cooke would most likely not be found alive.

"That's the end of our longest, hopeful survival period, based on the conditions on Mount Hood," said Wampler. "Right now, we're going to let everybody go home for Christmas."

Undaunted by punishing snowstorms, rescue crews headed into the mountain soon after Kelly James used his cell phone on Dec. 10 to tell his family that he and two companions were in trouble.

Searchers found James in a snow cave Sunday, several days after he had died of hypothermia, according to the results of an autopsy Wednesday.

"There were no disabling injuries documented by either the autopsy or X-rays," the report said, and James had been dead for several days before his body was found.

What happened on the mountain is a matter of conjecture based on James' telephone call, photos taken by the climbers, and such evidence as two ice axes and a climbing harness found by search crews.

Authorities say James might have been injured in a fall, prompting Hall and Cooke to go for help. The two climbers then might have fallen or been blown off a cliff, buried by an avalanche or died of hypothermia.

Morale among searchers had been high, buoyed by pizzas sent by the climbers' families and socks by local businesses, the sheriff said.

Wampler said the search had been risky, including operations near the summit where rescue teams located James' body and climbers and military personnel winched it off the mountain.

The three experienced climbers had planned on a quick, lightly equipped ascent on Mount Hood. But a quick climb in December is shortsighted, the sheriff said.

"A minimum climb this time of year is three days — not just one day, three days," Wampler said. "You plan on having to stay out there in case something happens."