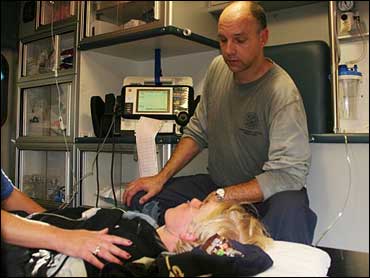 It was the wilderness - a cascade of mountain laurel and rhododendron flowing over loose rock and steep cliffs - that posed the greatest danger to a missing autistic hiker. But in the end, that dense foliage kept Jacob Allen safe.

"You cannot describe this as anything else than an incredible story of survival," says CBS News correspondent Joie Chen.

After four cold days and four nearly freezing nights, searchers spotted the 18-year-old sleeping under a thicket of laurel in the Dolly Sods Wilderness Area, part of the Monongahela National Forest.

"It made sort of like an umbrella, but underneath it was bare and open," State Police 1st Sgt. Jim Wise said. "It made some type of shelter."

Though Allen was less than a mile from the spot where searchers had found his hat Monday, the brush kept his location hidden until Thursday afternoon. Wise believes it also may have kept the teen, who is nonverbal, from wandering toward 20- to 30-foot cliffs.

"He rolled over after I called his name and he didn't have much in the way of reaction, but he recognized me. I could tell," said Jeremy Reneau, 25, the first to spot Allen.

Jacob's silence was no surprise, reports Chen. The 18-year-old has autism and cannot speak. His family says he has the reasoning of a 3- or 4-year-old child.

After a quick meal of candy bars and peanut butter sandwiches, Allen tried to walk with rescuers but tired quickly. Reneau, Wise and others carried him on a litter to a trailhead where 50 people, including his parents, awaited.

"There were tears. There was clapping. I was crying. Other people were crying," said Tiffany Curran, a volunteer firefighter.

Told that some people are calling him a hero, Reneau protested.

"Well, I was with 300 other people who donated their time and energy to be there for Jacob. And if I'm a hero, we're all heroes," he said on CBS News' The Early Show.

Allen was in good condition Friday morning at Davis Memorial Hospital in Elkins, where officials said he remained under observation. His parents, brother Micah and sister Brittany were with him.

(CBS)
"I spent the night in the hospital with Jacob. He's restless, but that's great. He's very alert, wanting food most of the night," his mother Karen said on The Early Show.

"He's doing really, really great. He was smiling at us last night, so it was really great to see that he's fine," added sister Brittany.

Allen wandered away from his parents Sunday afternoon on the Boar's Nest Trail in Randolph County. Hundreds of volunteers and trained professionals had been combing the woods, calling for him to come to them for candy bars, ice cream and other food. After each shout, they listened closely for rustling brush.

But hopes began to dim after overnight temperatures dropped to as low as 38 degrees. Allen had been wearing only a wind jacket and wind pants over his T-shirt and hiking boots. He had no food or water with him.

When word of the rescue reached the Allens' neighbors in Morgantown, the joy was unconstrained.

"A miracle has happened and the world has needed a miracle for a long time. This blessed young child has been saved," Gloria Morgan, at cook at Morgantown High School, where Jacob is a special-needs student, told CBS station KDKA.

The Allens live just a block from the school.

"All week there's been a lot of tension at the school and now that they found him alive, it was just like a huge weight off of everyone's shoulders and the response was amazing," high school junior Jeff Mimmear told KDKA.

"I've been going to school with him since like elementary school I've known him and it's good to have him back," added senior Michael Caridi.

"I just think it's awesome. It's a blessing ... We've been praying for protection and that he would be found safely and it happened," said parent Cheryl Phillips.

"There's really no word to describe the feeling you get to hear something like this," said Pauline Morris, bursting into tears.