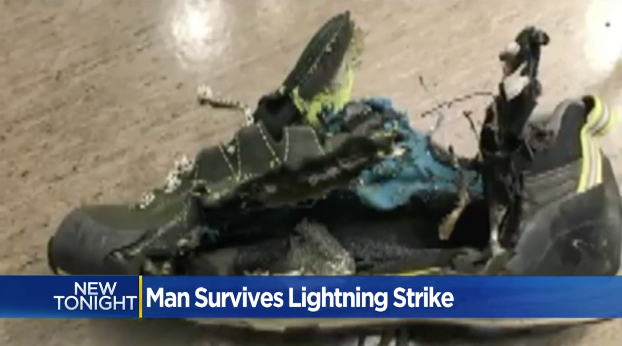 SACRAMENTO, Calif. -- An Austrian hiker who was struck by lightning and survived is now recovering at UC Davis Medical Center, CBS Sacramento reports.

Matthews said you have about a one in a million chance of getting struck by lightning, but hiking on a mountaintop during an electrical storm increases those odds exponentially.

"The storms can develop very rapidly and be on top of you in a matter of seconds, it seems," he said.

During Tuesday's storm, Matthews said the Austrian man and his companions were in a risky situation.

"Not surprised at all," Matthews said. "I think it's very fortunate that he survived and that's good news."

Paramedic Matt Calcutt said he has never seen anything like it. The boulder looked like it had exploded across the ridge.

According to Matthews, there were upwards of 800 strikes, which was a "rather substantial outbreak" for northern California.

While describing the rescue, Calcutt said the victim's clothes were literally blown off.

A lightning bolt is "five times hotter than the surface of the sun," Calcutt said. "So imagine all that heat going through your body in a very short period of time. In an instant, you could literally, seemingly, explode."

Matthews said even the most experienced hikers can run into trouble fast and these three hikers are lucky to be alive.

According to those close to the victim, he's expected to make a full recovery.