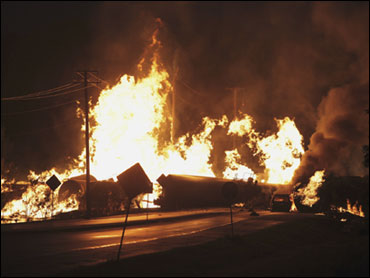 There was high water along the northern Illinois rail line where a freight train derailed, setting off a fiery explosion and killing one person, federal authorities said Sunday.

It's unclear what the exact water levels were during Friday's crash and what role if any water played in the accident, said Robert Sumwalt of the National Transportation Safety Board.

Parts of northern Illinois may have gotten as much as 4 inches of rain Friday, according to the National Weather Service. Chicago's O'Hare International Airport, 40 to 50 miles east of Rockford, measured 3.6 inches, a record for the date.

Sunday was the first full day federal investigators spent at the accident site. Burning tanker cars kept them at bay for much of Saturday.

"We've been busy and productive," Sumwalt said at a news conference Sunday afternoon. "But there's still a long way to go."

The NTSB has said identifying a cause of the derailment could take a year.

The agency has conducted initial interviews with the train's crew, and investigators are looking for witnesses, Sumwalt said.

"We want to reach out to the people who might have witnessed something before, during or immediately after the derailment," Sumwalt said.

Canadian National Railway Company officials say 18 rail cars loaded with ethanol left the tracks, exploding into flames. Zoila Tellez, 41, of Rockford, abandoned her car at a rail crossing and made it 20 feet before she fell and died.

A 17-year-old girl injured in the accident was in critical but stable condition Sunday at the burn unit of Chicago's Stroger Hospital, said spokesman Marcel Bright.